25 years of TRAM in the Nederlands Openluchtmuseum 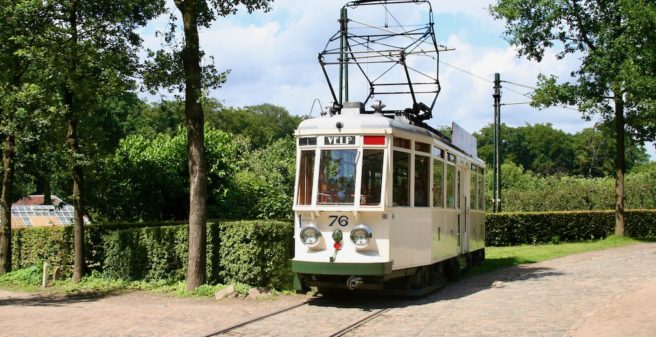 In the Nederlands Openluchtmuseum in Arnhem, the largest and oldest open-air museum in the Netherlands, the tram is celebrating its 25th anniversary this year.

In 1996 an approx. 1.7 km long circuit was built, which is driven counter-clockwise and serves six stops. In contrast to the Arnhem tram in 1067 mm gauge, which was destroyed in the Second World War, the route was built in standard gauge in order to be able to use historical trams from other Dutch cities. There is a passing track at the entrance and a triangular track that is not used during normal operation on the route so that the vehicles can be turned.

Impressions from the Openluchtmuseum (please click to open the picture gallery):

Based on old photos and memories of former employees, the depot of the old Arnhem tram was reconstructed to about one sixth of its original size with four hall tracks. In the years 1995 to 1997, a former Arnhem tramway railcar was also rebuilt, whereby the railcar 76 is not an exact copy of the former series 70-75, as, for example, the gauge was changed to standard gauge. For the year of construction in 1929, the vehicles built by the Beijnes company in Haarlem were very modern at the time as four-axle vehicles, with a sloping windshield and even with one-man operation.

With the sidecar 1050, with the help of a lift at the stop at the museum entrance, wheelchair users can also take a tour of the tram. In addition to the vehicles mentioned, there is also a rail cleaning car from Amsterdam (GVB Rr3, built in 1958) and is used accordingly in this function.

For the 25th anniversary of the tram, two guest vehicles from Amsterdam and The Hague are in use: In addition to the Amsterdam three-axle driving car 533, there is the Hague trailer car 779, which is used behind the otherwise solo Tw 274. In the meanwhile 25 years there have always been guest vehicles and the Arnhem replica Tw 76 has already been used in Amsterdam, for example.

It is also worth mentioning that the coordination and responsibility lies with the museum, but around 100 volunteers operate the tram.

I am not seeing any trolley bus pics there. Arnhem is famous as it’s the only city in Benelux with trackless still operating. No trackless at the Arnhem museum?

Why did they not build new trams after WW2 for Arnhem? I realise most of the trams were destroyed in WW2.
We were there in 1996 and rode on the tram as my wife (Mia Rietveld born 1942 in Velp) is originally from Velp and migrated to Australia in 1955.
We were very impressed with your museum and would like to return to Holland for holiday but is prevented by COVID.
regards, Pat Harrington