A new light rail system in China: The Huangshi Tram 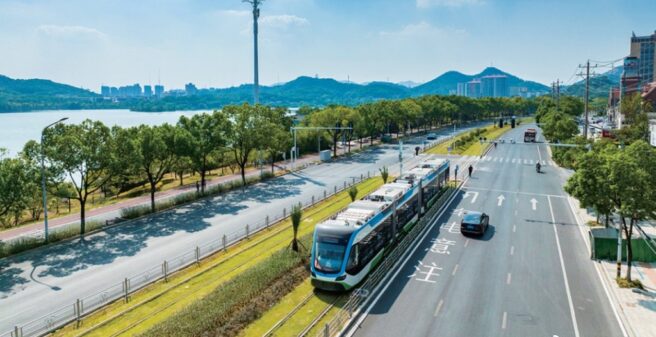 In addition to various openings of metro and suburban railway networks in various Chinese cities with millions of inhabitants, as usual in the days around the turn of the year, a completely new tramway has started operation. It is located in the province of Hubei at the foot of the “Golden Mountains”.

An new line is  currently 26.9 km in length and double-tracked throughout on its own, mostly reserved track. 30 stops are served. The line includes several longer sections away from the (current) settlement. A 1.5 km long tunnel section under a mountain ridge and several bridge sections have also be constructed, but there are also sections in the middle of newly developed, multi-lane roads. Here, mostly grass track is laid, in the area of larger crossings the track is paved on short sections.

The tramway is operated by four-section, 36.6m-long low-floor CRRC low-floor tramcars. They can carry 340 passengers, 68 of them seated. They draw power from roof-mounted supercapacitors, which are charged at stops via short, fixed overhead rails.

The construction of the interurban tramway had been decided in 2017 and is 60% financed by funds from the China New Development Bank. Construction work began in September 2020, with service starting on 28 December 2022. Travel is for free, at zero fare, until the end of January 2023.

[…] There you will find 50767 more Infos: urban-transport-magazine.com/en/a-new-light-rail-system-in-china-the-huangshi-tram/ […]