A new tramway section in Magdeburg 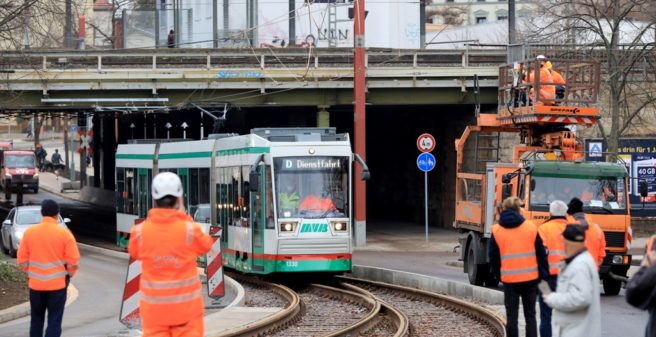 The new tram line closes a gap in Magdeburg’s tram network and connects the existing lines at Leipziger Straße and Schönebecker Straße. In addition, the route is the direct extension of the Europa-, West-, Südring and Wiener Straße and thus an important part of the tramway’s east-west cross-connection.

The new section is the 7th construction phase of the overall project “2nd North-South Link for the Tramway”. With the 1.1 km long tram route via Warschauer Straße and Raiffeisenstraße, the transverse link in the tram network has been closed. At the same time, 500 metres of the existing tram line in Schönebecker Straße were and are being fundamentally upgraded and modernised; the section between Warschauer Straße and Hasselbachplatz will remain out of service for the time being due to the construction work.

Access to the tram is provided by three new, barrier-free stops: Budenbergstraße, Buckau S-Bahn station / Puppentheater and Dodendorfer Straße. The fourth stop, Benediktinerstraße, is still being realised in the course of the pending construction of the last section on Schönebecker Straße. All stops have been equipped with modern passenger information systems so that the next departures are displayed in real time. In addition, all stops have received a waiting shelter with seating.

Most of the tram tracks are physically separated from the individual car traffic – the trams can run independently and without disruptions.

Since 16 December 2020, tram line 2 runs over the new section, operating between Westerhüsen and Alte Neustadt. It provides connections to Buckau, Sudenburg, Hasselbachplatz and the city centre. It replaces bus lines 52 and 54, which previously ran via Warschauer Straße and Raiffeisenstraße and now have new terminuses as part of the network restructuring.

The tramway route on Schönebecker Straße between Warschauer Straße and Benediktinestraße is under reconstruction and will be out of use until end of 2021.