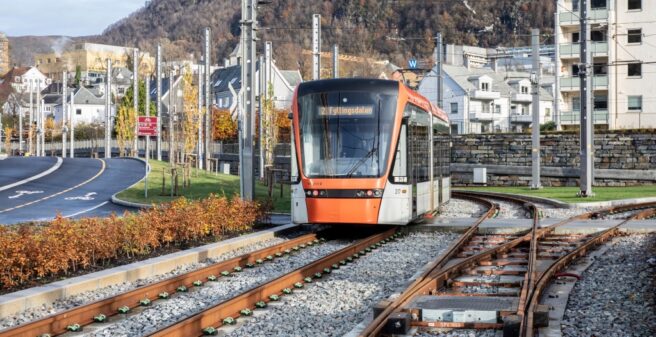 The expansion of tram systems has also gained momentum in Scandinavia in recent years. Norway’s second largest city, Bergen, even dared to build a completely new system – in 2010, the tram returned to the city as a modern low-floor system under the name Bybane, some 45 years after the closure of Bergen’s former tram which was closed down in 1965. Bergen has approximately 248,000 inhabitants.

The first line soon proved to be very successful and has since been extended twice – it has been 20.4 km long since 2017. The increase in passenger demand and the high level of acceptance on the part of the population soon made plans for a second line realistic, and after around five years of construction, the time has now come: Today, 21 November 2022, Line 2 between Kaigaten and Fyllingsdalen starts revenue service. It is in total 9 km long and branches off the existing line 1 in the city centre. In addition, the two lines cross again in Kronstad. The total journey time from the city centre to Fyllingsdalen/Oasen is 16 minutes.

The tram line is double-tracked throughout and uses two longer tunnel sections totalling 4.2 km. However, there is only one underground stop on these sections, the Haukeland station. Two pedestrian and bicycle tunnels were also newly built. The construction of a new embankment for the light rail line along the open sea was also necessary and turned out to be costly.

A route map can be found here:
https://www.urbanrail.net/eu/no/bergen/bergen.htm

The Stadler Variobahn trams already known from the first line are used, and an additional 6 of them were purchased for Bergen’s second line. Currently, there are a total of 34 seven-car low-floor trams of the same design in the fleet.

The trolleybus service, which has existed since 1950 and is currently the only one in the country, is currently flourishing, too. It has only been extended and modernised in the last two years with the purchase of 10 Solaris battery trolleybuses, which also allow longer journeys off the overhead network in battery mode.

Picture gallery of the test runs:
(click on a picture to open the gallery)