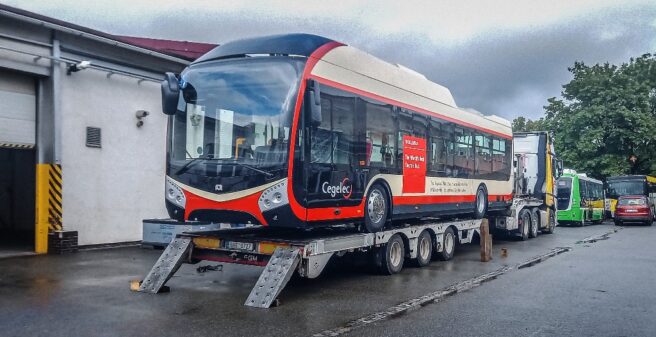 Between Tuesday, 20 September and Friday, 23 September 2022, the gates of the Berlin Exhibition Grounds will again open for visitors to the InnoTrans trade fair for the first time since before Covid. The Czech company Cegelec, manufacturers of electrical equipment for public transport vehicles, will be introducing a completely new product range after many years. Its stand will be located in Hall 17, Stand No. 300.

Electrical equipment from the Prague-based company Cegelec (one of the successor companies of the former ČKD Trakce, now a member of the Vinci Energies Group) is used in thousands of trams and trolleybuses. The success of the electric equipment with the brand name “Progress” in the former Czechoslovakia was so great at the beginning of the millennium that its name became the epitome of a modernisation variant of the famous Tatra T3 trams. At the InnoTrans trade fair in Berlin, after many years of successful production of the “Progress” and “Europulse” series, a completely new generation of traction and on-board converters will be presented with the brand name Cegelec Alva.

“After three years, we have succeeded in completing the development of new product lines. These include Alva electrical equipment, Alvaux on-board converters and Alva-Air air conditioning systems for rail vehicles. We will present examples of all three of these products at InnoTrans. In terms of the development and architecture of these products, this is not an evolution, but a real revolution,” says Miroslav Opa, Managing Director of the company. In recent years, the Prague-based manufacturer has completely changed the design of its products and moved to the use of so-called SiC (silicon carbide) elements instead of conventional IGBT transistors. This ultimately results in a reduction in both weight and noise, an increase in reliability, as well as an increase in overall efficiency, which can be as high as 96%, while the older generation was around 89%. Higher efficiency, of course, means a reduction in power consumption – all significant benefits for public transport operators.

Visitors to the fair can see the difference between the old and the new generation with their own eyes. At first glance, they will see two almost identically sized containers. The older one, however, will only be able to deliver 7.5 kW of power, while the newer one, which is intended for the new Berlin metro trains, can deliver four times as much.

The Cegelec stand will also feature a trolleybus equipped with Cegelec Alva electrical equipment. It is the second SOR TNS 12 vehicle destined for the Czech city of Jihlava – it came off the production line in Libchavy on 15 September and from there directly to the fair.

“The trolleybus is still the best solution for electric buses from an economic and ecological perspective, and it also has advantages from an urban planning point of view. Therefore, the focus of our InnoTrans appearance is not only on our products, but also on the promotion of modern trolleybus transport in general. Electric buses have been presented at InnoTrans for a long time, but the best electric bus – the trolleybus – has been missing there until now. We started thinking about how we could show one to the world. And since another manufacturer will also present its trolleybus at the fair, the representation of the so-called in-motion charging technology will be all the stronger, which is certainly positive,” says Libor Hinčica, Trade Director of Cegelec.