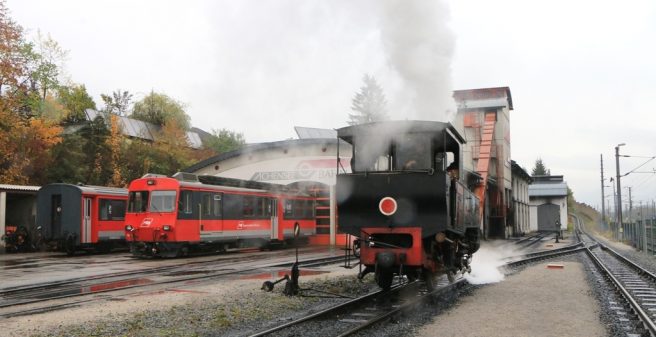 The Achsensee metre-gauge cog railway in the Austrian federal state of Tyrol has been operated for more than 130 years. Traditionally, it operates every year from March til October to provide service to visitors and tourists over the 6.8 km long route from Jenbach in the Inntal all the way up to the shore of the Achensee in the Tyrolean mountains, covering a height difference of 400 m and an inclination of 160 ‰.

Plans to shut down the railway came up several times in the long history of the railway, but the people in charge have repeatedly managed to rescue the railway. For several years, an extensive modernization concept has been studied: It foresees the electrification and conversion into a modern regional railway service. In addition, the existing track would be extended from the current terminus at Seespitz along the shores of Lake Achensee to Pertisau. With this extension the line would connect the most important villages on the plateau to Inn Valley. A much reduced travel time of just 25 minutes would make the line attractive also for many commuters who currently use cars on congested roads. In Jenbach there are also connections to the main line of the ÖBB and to the 760mm-gauge Zillertalbahn. The Achenseebahn could develop from a pure tourist attraction to a fully-fledged regional railway line. Since the operation of steam with the four old locomotives is to be maintained in parallel, the role of the Achenseebahn in an integrated tourist concept of region would remain, since the operation of the four old steam locomotives is to be maintained in parallel.

Already last year, the urgent need for some track renewal was covered partly by funds from the regional federal government of Tyrol. To complete the entire modernization programme, an estimate amount of around EUR 30 million is needed to carry out a full-scale track renewal, the electrification of the line, and the extension to Pertisau. However, public funds are also needed to finance operating deficit of the line.

Four years ago, one of the then new low-floor trainsets for the Swiss Appenzeller Bahnen was shipped to the Achenseebahn in order to promote the electrification. When the Appenzeller Bahnen closed the cog-railway section near St. Gallen two years ago, five of its older trainsets were purchased by the Achenseebahn at a reasonable price. All were built by FFA/SLM/BBC in 1981, but are still in excellent condition. These are BDeh 4/4 No. 11-15 and ABt No. 111-115. The vehicles arrived in Tyrol between June and October 2018 and are stored for the time being. Train 15+115 has been exposed at the platform in Jenbach since then, in order to draw attention to the future project for the railway.

However, it came somehow as a surprise that the Tyrolean federal state government announced at the beginning of March that it would not approve the planned funding of EUR 400,000 which are necessary for some reconstruction work before the start this year’s tourist season. It is even more surprising as the same institution granted an amount of EUR 800,000 for the refurbishment of the line just one year ago. The Achenseebahn AG had to file for insolvency due to lack of liquidity, the 17 employees of the railway lost their jobs. Only last year, several local communities had taken over the majority of the company’s shares in order to ensure its continued existence in the longer term. However, without funding from the Land of Tyrol, operation continuity in its present form cannot be ensured. Plans for the conversion into an electric regional train service are therefore also on hold.

In the coming weeks, all involved parties will have to assess which options exist for future operation. The end of the season on Sunday, 27 October 2019 was hopefully not also the last day of operation for the rack railway, which by most people is considered to be an integral part of the region’s tourism.

A network map is on the company’s webpage: http://www.achenseebahn.at/index.php/attraktionen-oesterreich-tirol.html

A petition to preserve the cog railway can be found here: https://www.openpetition.eu/at/petition/online/rettet-das-kulturerbe-achenseebahn