After Corona: public transport ramp-up and the financial impact 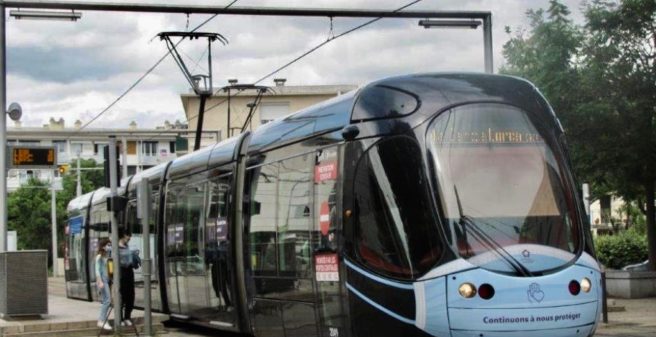 Several Alstom Citadis trams have been decorated with a mouth and nose protection in Montpellier, France I © Edouard Paris/ https://tramwaydemontpellier.net

Buses, trains and stops seemed like ghost towns during the Corona lock-down in March and April. Empty buses and trains, adapted timetables had become a normality for many public transport authorities during the outbreak of the new Sars-CoV-2 (Corona).

In several European countries, including Germany, the lock-down is eased since the beginning of May. Shops are allowed to open again, many companies have started work and students are going back to schools. With the partial relaxation of public life, the restart of public transport has become necessary.

At the same time, however, the economic effects of the lock-down also come to light. Additional efforts and lost revenue have left their mark on transport companies. A financial rescue package is required by governments.

Wearing mouth-nose protection is now mandatory in public transport in Germany. Checks are being carried out at many train stations. Many transport companies publish information, make announcements and use the digital channels to better inform passengers about how to use public transport in times of Corona. “Hygiene stations” have even been set up in some cities. In Düsseldorf, Deutsche Bahn Station & Service, public transport operator Rheinbahn and the public utility services (Stadtwerke Düsseldorf) inaugurated a water and disinfection dispensers.

According to information from the air conditioning manufacturer Konvekta, aerosol transmission (by air) of the corona virus is not the primary route of transmission. This is also confirmed by studies of the Robert Koch Institute which considers the transmission of SARS-CoV-2 via aerosols to be unlikely in normal social interaction. 90% of the transmissions take place via droplet infection (coughing and sneezing) and 9% through contact with contaminated surfaces. That means an infection is much more likely through direct human-to-human transmission or by touching the handrails, seats, or other surfaces.

However, aerogenic infections are not completely ruled out, since there is the possibility that droplets can be deflected from their trajectory and taken up by the air movement in the vehicle.

The number of pathogens can increase significantly in closed rooms. Regular ventilation therefore reduces the possible risk of infection. Furthermore, ventilation promotes a good indoor climate and prevents the oral and nasal mucous membranes from drying out due to the higher humidity, which are then better protected against pathogens. This means that adding fresh air or increasing the proportion of fresh air is a sensible measure.

Is additional maintenance of the air conditioning system necessary?

According to Konvekta, the air conditioning systems should be serviced regularly. Part of this maintenance is the inspection of the system for dirt and the filter change or cleaning of metal filters.

The air drawn in from the environment only gets into the vehicle interior through highly effective filter technology. The air quality is even improved as a result. The bacterial count measured at the blow-out points was lower than that in the inflowing air. The systems thus actually contribute to an improvement in air quality. Viruses are still smaller than bacteria, but because they always adhere to a carrier, they too get caught in the filters of the air conditioning system.

How do passengers feel about public transport now? After all, the virus has not yet been defeated and, as we have all learned, the risk of infection and spread is particularly high, especially in closed rooms and crowds – such as buses and trains.

As the online magazine Heise reported last week, many public transport users are actually uncomfortable when using public transport. This was found in a survey by the Institute for Transport Research at the German Aerospace Center (DLR). Respondents feel much safer in their own car or on a bike.

The aim of the study was to find out how the corona crisis affects the mobility behavior of the population. 1000 people between the ages of 18 and 82 were interviewed. According to the Heise report, 63% of those surveyed said that they feel less comfortable using public transport and trains than before the Corona crisis.

It can be assumed that public transport will have to bridge a “dry spell”. “It is clear that the corona pandemic is fundamentally changing our mobility behavior. Public transport in particular has to bridge a dry spell,” said Barbara Lenz, director of the DLR Institute of Transport Research.

It is even possible that there will be a long-term effect on the number of passengers in public transport. According to another study by the McKinsey management consultancy, 51% of those who used the bus before the crisis will do so less or not at all in the future. 47% want to travel less or not at all by train or metro. 56% of those surveyed stated that they wanted to travel less for work or for pleasure, and 27% did not even want to travel anymore. The representative survey of more than 1000 consumers in Germany was carried out between 30 April and 3 May 2020.

Of course, these surveys are only a snapshot of the current situation and it is still too early for reliable forecasts. Many public transport users and citizens are currently probably worried. The use of public transport depends on many boundary conditions. However, it is currently completely uncertain when the number of passengers will return to the pre-Corona level.

The corona virus has paralyzed economic activity around the world. Public transport has been maintained with a basic offer as a systemically relevant industry. The main issue: The passenger numbers plummeted.

According to reports by RBB24 (LINK), the Berlin transport operator BVG is short of money due to heavy loss of income and an expensive wage agreement. According to the report, passenger numbers decreased by 30 percent during the corona pandemic. Half a million of Euros of ticket sales are missing every day. The situation is very similar in other cities: In Munich, peak passenger demand even fell by up to 80 percent. The loss of income has so far been in the double-digit million range. MVG expects a three-digit Euro loss in the course of the year.

The situation looks even more critical in rural areas: at the beginning of April, the transport authorities in Brandenburg reported a drop in passenger numbers of up to 95 percent, for example with Regiobus Potsdam-Mittelmark and Cottbusverkehr. Although the worst has been prevented over the past few weeks in rural areas by thinning out offers and short-time work, the finances of many Brandenburg cities and counties were already tight before Corona. The managing director of Cottbusverkehr, Ralf Thalmann, told RBB24 how serious the situation is. Due to the early payment of already planned state funds, the transport companies can guarantee liquidity until the middle of the year. From today’s perspective, however, the financial means are not sufficient to ensure bus and tram operations in the second half of the year.

According to RBB24, the state and municipalities have reached the limit of their financial resilience. Politicians must now clarify how public transport, particularly in the countryside, where funds are already scarce, can be ensured in the future and, according to the actual aim, expanded.

According to the Berlin Senate, money will soon flow in the German capital: BVG Berlin has been promised a funding of EUR 250 million until the year 2025. A short-term solution has also been found in Brandenburg. The Brandenburg Ministry of Transport applied for additional 115 million euros in state funds last week in order to support transport companies

With passenger numbers down to a 30 percent of the pre-Corona level, Germany’s transport operators could have cut back their offers massively. But the opposite was the case. In fact, some operations were not reduced at. For example, in consultation with the federal states and public authorities, local rail passenger transport (SPNV) was reduced by around 9% in March and by around 24% in April. In some federal states, 100% of the operations were carried out.

According to the VDV, local authorities also acted in close cooperation with the authorities. As a result, the reductions are around 12 percent in March and around 20 percent in April. “From a purely economic point of view, our member companies would have had to significantly reduce their offer in order to save costs and thus compensate for loss of income. But in Germany we are a central component of general services and we have a broader mission. At the express request of politicians, public transport and public transport companies have continued to maintain transport to a very high degree from the beginning of the epidemic so that people who need mobility could get to their jobs and the whole country could keep moving . At the same time, we were largely able to ensure that there was sufficient space between the passengers thanks to the extensive schedule, ”said Wolff.

The VDV also points out that the industry has registered practically no short-time work, even though the necessary prerequisites were in place. If one compares the short-time working quota of other companies operating in the transport sector – for example, aviation – the bus and train companies could have had around 97,000 short-time workers. As a result, the state would have incurred monthly expenses for short-time work of around 90 million euros, which has been avoided.

The situation is very similar in all European countries. At the European level, the association for public transport UITP works closely with the EU institutions in order to highlight the financial issues the sector is currently facing. Considering the impacts of the pandemic on the sector, UITP has engaged with the leadership of the European institutions on several occasions in the recent weeks and months. Also UITP is also reaching out to the EU institutions by bringing together more than 80 CEOs and city representatives from almost 20 countries. In order to limit the consequences of the crisis on the public transport sector, exceptional targeted measures will need to be adopted at EU level and rapidly deployed.

The first available data from various European Member States show that the passenger transport sector’s ecosystem will continue to be heavily affected by the pandemic: across Europe, the sector expects 40 billion Euros in farebox revenue losses by the end of 2020.

The situation in oversea countries

The Corona crisis is affecting the public transport sector worldwide. The list of countries and cities in which public transport suffers from a lack of funds is endless: from Singapore to Melbourne and from Sao Paulo to New York financial difficulties are a fact. There is a lack of money everywhere to maintain public transport in the short and medium term. In the USA, transportation companies in the 14 largest metropolitan areas have called already for a second corona rescue package. Last week, the American Public Transportation Association (APTA) hosted a press call to discuss the impact of the coronavirus pandemic on the public transportation industry, and APTA’s recent request on behalf of the industry for 23.8 billion US-dollars in emergency response and recovery funding.

APTA has urged Congress and the Administration to provide the additional emergency funding to offset the extraordinary direct costs and revenue losses caused by the COVID-19 crisis. This funding would allow transit agencies across the country to continue to provide essential services and support the economic recovery.