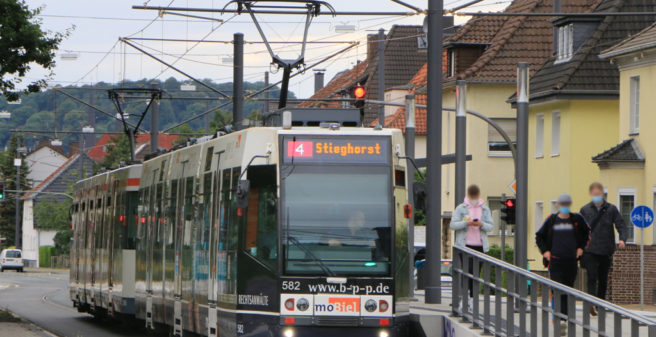 As part of the the introduction of a new timetable on 1 August 2021, two of Bielefeld‘s light rail lines switch the routes: Line 4 took over the branch to Stieghorst from line 3. Line 4, which was first introduced in 2000 as a half-metre line to the university, thus became a cross-city line and runs now from Lohmannshof to Stieghorst, serving 19 stops with a journey time of 26 minutes. At the same time, line 3 coming from Babenhausen Süd was shortened and now ends at Dürkopp Tor 6 or, with some early and late departures, at Rathaus (town hall).

The section from the city centre to Stieghorst can now be used by VAMOS double traction train sets as the elevated platform at the newly built station Sieker Mitte came into service in mid-May. However, a corresponding extension of the northern section of line 3 (Jöllenbecker Straße) is not expected until 2023 – 2025 at the earliest.

The new cross-city line is completely equipped with elevated platforms, so that the VAMOS double traction units without folding steps on the doors which are currently in the process of delivery can also be used here. On line 2, VAMOS are also used, but folding steps are needed as some station do not yet have high-level platforms. Thus, after delivery of the complete new VAMOS series, Line 1 and the new Line 3 will mainly operate with Düwag/Siemens M8D tramcars.

In addition, the timetable change was also used to abondon the supplementary lines 10, 12, 13 and 18 which combined part of the existing main lines 1, 2, 3, and 4. All journeys are now assigned to one of the main lines, always depending on the destination. This means that the same route has different signs in both directions: For example, a trip from the Sieker depot to Senne is marked “1”, but in the opposite direction to the depot it is marked “2”.