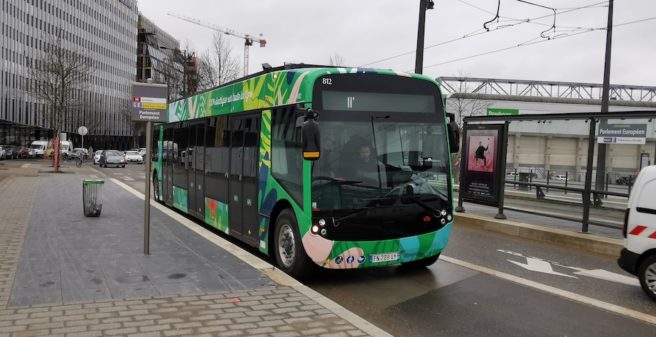 Since 24 February 2020, public transport in the European metropolis of Strasbourg has a new emission-free e-bus line: on line H between the main station and the European Parliament, six all-electric Alstom Aptis buses are operating in a friendly green livery. These are the first series Aptis vehicles in operation. Further 50 Aptis will be delivered later this year to RATP Paris.

Six out of 12 e-buses had been delivered at the end of January to Strasbourg and have been numbered 812 to 817. The remaining six Aptis are expected by the end of March for the Strasbourg transport operator CTS. Charging points have already been created in the depot for all 12 e-buses, thus enabling for a range of 200 km. The Aptis e-buses are charged overnight in the depot so that the battery life is not impaired by rapid high-power charging.

Electric service from 4 am until after midnight

Service starts at 4 am and the first bus leaves the central station (Gare Centrale) at 4.30 am to cover the 3.2 km distance in 15 minutes directly to the European Parliament (Parliament Européen). The bus also stops at the eight stops in between (Wilson, Travail, Place de Pierre, Phalsbourg, Clemeenceau, Lycée Kléber, Palais de la Musique et des Congres and Wacken) where transbording to the existing tram system is possible. With the exception of the stop Palais de la Musique et des Congres, at all other 9 stops, it is possible to change to other bus or tram lines, or at the main station to long-distance and regional trains.

Inauguration with the mayor

At the official opening on 24 February in front of the European Parliament, the Mayor of Strasbourg Roland Ries, the President of the Eurometropolis Strasbourg, Jean-Philippe Lally, Directeur General CTS, and Didier Pfleger, Managing Director Aptis Alstom, spoke about the advantages and improvements for the city and the Eurometropolis Strasbourg through the new bus line H with the purely electric Aptis buses.

Before the inauguration of line H, the journey from Strasbourg’s main station to the European took 25 minutes because passengers had to change between trams. The new line H offers a direct link.

The buses offer 18 seats and can carry up to 80 passengers in total, as well as two wheelchairs. For the drivers, CTS has chosen ISRI seats. The buses have three doors and the individually suspended wheels allow the bus to park and unpark at right angles to the direction of travel. Hubert Goeller from the operator CTS (Compagnie des Transports Strassbourgeois) finds it particularly fascinating that the middle section of the bus is identical to a tram body, which is why the bus appears so large and actually offers so much space. The Aptis buses are built by Alstom very close to Strasbourg.

The sustainability of the new Line H has been underlined by CTS with promoters who handed over present cards with the bus silhouette as a gift to passengers and interested people at various stops of line H. The present cards highlight the direct connection and emissjonfree propulsion of line H and also included some plant seeds. If the paper is placed on damp earth and kept moist, the first shoots should show in a week’s time.