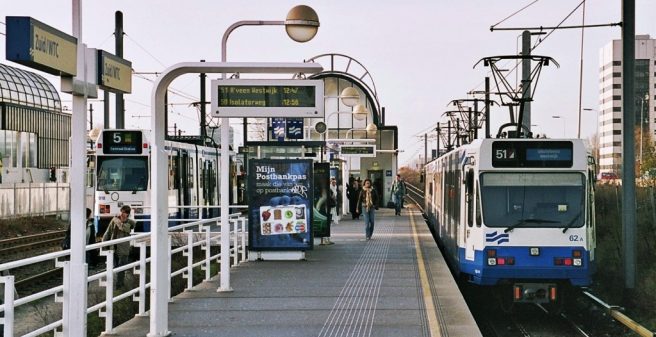 After almost 30 years to mixed operation the route to Amstelveen will be converted into a pure low-floor tramway. A totally new tram service 6 has been introduced since end of May.

Amsterdam’s light rail line 51 used the existing metro network as well as a section of mixed operation together with traditional tramways. The Southern section of shared track on the way to Amstelveen is now being converted into a pure low-floor tramway.

The end of mixed operation

Mixed operation came to a stop on 3 March 2019 on the 4.6 km of shared track between Station Zuid and Amstelveen Orangebaan. Since then, metro line M51 still uses the existing and mainly underground metro section between Centraalstation and Station Zuid, but continues together with metro line M50 to Isolatorweg terminus. Tram line 5 keeps operating on surface, but now between Westergasfabriek via Leidsplein to Station Zuid and further on to Amstelveen Binnenhof losing the well established connection via Dam to Centraalstation. Passengers from there have to change. During July/August 2019 the line will be operated by bus for some time in order to allow for the adaption of the existing stops to low floor only access. Until today all stops on the common section of route 5 and M51 had both high and low level platforms. The section between Amstelveen Oranjebaan and Westwijk is out of service since 3 March and bus route 55 is providing the service instead. Once the work is completed, new low floor tramways will also operate here, on an extended tramway line 5 between Station Zuid and Westwijk. This is scheduled for the first quarter of 2021. However, in Zuid passengers have to change to the new cross-city metro line, which started its service in July 2018. Part of the reconstruction work is the permanent closure of the four stops Sinnerij, Gondel, Marne und Amstelveen Centrum, while the stops De Boelelaan/UV and A.J.Ernststraat will be merged. Together with the construction of three new flyovers this quite substantial effort will help to shorten the travel time on the new route.

Due to increased passenger demand on the section of former joint operation of tram 5 and metro M51 the operator GVB introduced a new service between Amstelveen and Station Zuid, operated at peak hours on weekdays.

New tramways have been ordered

Part of the fleet of new tramways ordered by the operator GVB and supplied by CAF will be used on the new line 5. There will also be a new depot along the Amstelveenlijn at Legmeerpolder. The new trainsets will replace the now 30 year old bi-directional BN tramways, which have a small low-floor section in the middle of the vehicle. The 4 bi-directional Siemens Combino tarmways will serve on other lines in the future, together with the additional 151, which have a single-ended design.

The light rail trainsets for mixed operation on the M51 will continue to operate on the metro network. They will lose their pantographs for overhead electricity collection as power supply on the other routes will be provided via third rail. These cars are now some 30 years old, too.

Mixed operation of tramways and metro car sets over the same track started in December 1990. For various reasons, the service proofed to be less reliable than thought, mainly due to the higher technical complexity.

Total investment costs are expected to be some EUR 300 mn.

A map you may find at: https://www.gvb.nl/sites/default/files/amstelveen3maartv2.pdf-