Amsterdam: Double traction and commissioning of the new trams 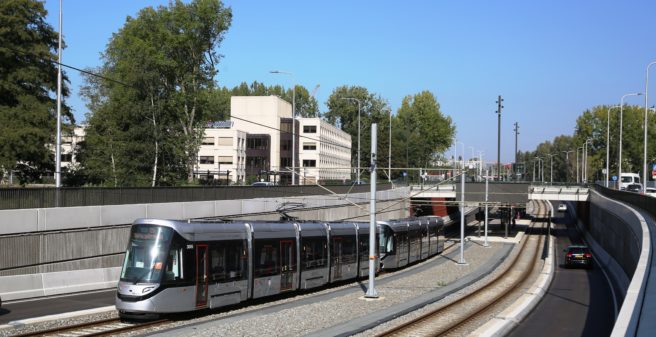 Progress is being made in modernising the Amsterdam tram fleet. The operator GVB received the first of the new 15G series tramways from the Spanish manufacturer CAF in spring 2019, and since then extensive test and training runs have been performed on the extensive network. CAF will supply the 72 five-section trams from two of its plants, Beasain and Zaragoza, by 2022. Initially, 63 trains had been ordered, and in May 2020 the GVB ordered a further 9 from an agreed option of up to 60 additional units. The new trams of the CAF Urbos 100 model have a length of 30 meters and a width of 2.4 meters. Each tram can accommodate 175 passengers, thereof 50 are seated.

In the meantime, 29 trams have arrived in Amsterdam and are numbered as series 3000. No. 3001-3025 will receive a different livery in grey-black-red as they will be mainly used on the suburban lines of the so-called R-Net, and they will mainly be run in coupled pais as double traction. The vehicles numbered from 3026 onwards are painted white and blue in the traditional Amsterdam colours.

Currently, test runs (brake testing, etc.) are taking place and emergency towing is training, too. Starting in October there will be further training sessions for the driver. Staert of revenue service is foreseen for 13 December 2020 – the CAF trains will operate on the Zuid/WTC – Amstelveen Westwijk line, the so-called Amstelveen-lijn, rebranded as line 25. From 2024 onwards, they are also expected to run on the new line to Uithoorn, to be built mainly on the track bed of an old railway line. South of Westwijk terminus a new parking facility for the CAF tramsets has been built, it is already in use.

Officially since Monday, 28 September 2020, in practice already some weeks earlier, the Siemens Combino tramways, which make up the majority of the current fleet roster, are operating in double-traction in revenue service for the first time in Amsterdam, on route 26: Centraal Station – IJburg. There are fixed pairs (2132 + 2131, 2134 + 2133, etc.) from the subseries 2131-2151 with ZUB, which is required for trips through the Piet Hein Tunnel. For some time single trams can still be found on the route during the day until more couples pairs are available. This is expected shortly. In the evenings only single tramways are operating the line. All trams for line 26 are based at GBS’ Zeeburgereiland facilities.