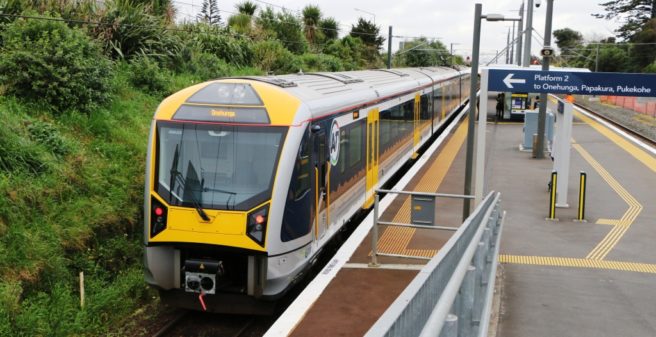 CAF has signed a supply contract of 23 new electric units for New Zealand’s largest city Auckland. The contract, worth more than € 130M, includes the maintenance of the trains until the end of 2025 and has an extension option for up to 5 additional units.

In 2011, Auckland Transport awarded CAF the supply of 57 electric units and their maintenance for 12 years and in 2017 a further 15 units were purchased. All 72 supplied units are currently in revenue service on the approximately 100 km suburban network in Greater Auckland. Area. CAF’s fleet has completed a mileage in excess of 33 million kilometres and has played an essential role in the increase in passenger numbers using public transport across Auckland.

The units will be similar to the 72 previously supplied to the same customer, consisting of three cars, two cabbed end motor cars and one intermediate trailer car, with a total capacity for 380 passengers. The body structure is made of stainless steel and each car is equipped with two passenger access doors per side. Also, the intermediate car is low floor to facilitate access for persons with reduced mobility and wheelchair users. As the entire New Zealand rail network, Auckland’s suburban network operates on 1,067 mm narrow gauge. The network was electrified by 2014 replacing previously used diesel DMU operation.

The new units are necessary to cope with the increase in passenger numbers expected by service improvement, and even more so when Auckland’s Cross-City Rail Link (CRL) opens as a 3km tunnel route between Britomart and Mt Eden in late 2024. In addition, electrification of the 15km section between Papakura and Pukehohe is scheduled for 2025 – it is currently still served by diesel railcars as shuttle services. CRL is the largest infrastructure project in the region for years and is expected to double passenger numbers on the commuter rail network in the medium term with significantly shorter travel times to and from the inner city centre and by means of various new connections.

In addition, New Zealand’s central government government and the Greater Auckland Regional Authority have decided that the long planned low-floor tram link to the airport will also have an inner-city tunnel section to ensure better and faster integration of the 23km line. More about this project – the country’s first tramway in almost 6 decades – in a later article.