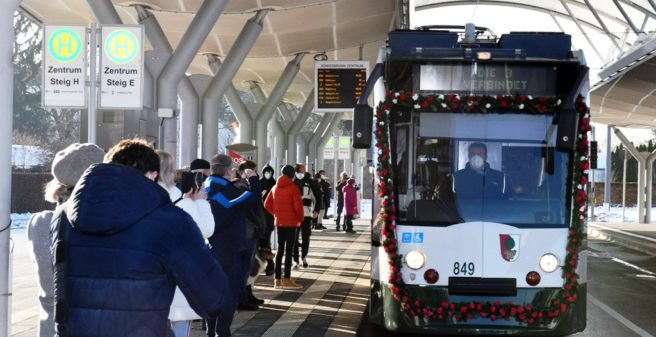 The opening ceremony of the new Line 3 to Königsbrunn had to be cancelled due to the pandemic. However, the decorated festive tram was still on the line, as here at the Königsbrunn Zentrum terminus | © swa/Thomas Hosemann

After about two years of construction, the 4.6-kilometre extension of tram line 3 from the previous terminus at Inninger Straße in the south of Augsburg to the centre of the neighbouring city of Königsbrunn was opened. Augsburg’s Lord Mayor Eva Weber, Königsbrunn’s First Mayor Franz Feigl, Augsburg’s District Administrator Martin Sailer and swa’s Managing Director Dr. Walter Casazza performed the official inauguration, but due to corona, a large opening party had to be dispensed with. Nevertheless, a decorated low-floor tram was on the road on the opening day. The line could be tested free of charge all day – further free rides are planned for next Saturday, 18 December.

The new section is 4.6 km long, of which 2.7 km are in the city of Königsbrunn. The line is double-track throughout the entire lengthand has been largely laid as a grass track. At the new terminus at the bus station in Königsbrunn there is a turning loop – there are direct connections to various bus lines.

A tram link to Königsbrunn had been discussed again and again since the 1970s, but only now the €52 million project could eventually be realised.

On 12 December 2021, the tram network was also restructered: Line 3 now terminates at the main station Hauptbahnhof, as does line 4, and line 6 from Friedberg takes over the branch to Stadtbergen. The journey time on the new section of line 3 is about 10 minutes, the total journey time from the central Königsplatz in Augsburg to the new terminus Königsbrunn Zentrum is approximately 30 minutes. During the day, a 15-minute headway is currently offered to the passengers to and from Königsbrunn – from about 5:00 am to 0:30 am.

A network scheme is available at: http://www.urbanrail.net/eu/de/a/augsburg.htm