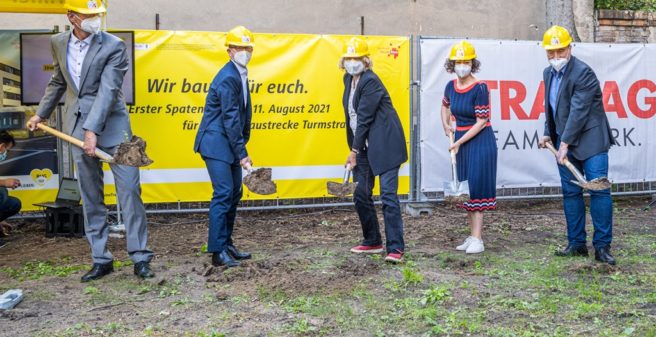 After more than 50 years, trams will be rolling through Moabit again from 2023. The Senate and BVG gave the starting signal for the construction of the new section of the M10 line between the main station and the Turmstraße underground station on Wednesday, 11 August. The approximately 2.2-kilometre-long line will be mostly laid on grass tracks and is expected to provide a direct connection between Moabit and the main station from the first half of 2023. The responsible Senate Department for the Environment, Transport and Climate Protection states the construction costs at €33 million. This corresponds to construction costs of about €15 million per kilometre.

Ramona Pop, Chairwoman of the BVG Supervisory Board and Senator for Economic Affairs, Energy and Operations: “The tram network is being significantly expanded for more mobility and climate protection in our city. The tram extension will make public transport even more attractive for Berliners. It will then be easy to change from the tram at the main station to the S-Bahn and long-distance trains and from the Turmstraße underground station to the U-Bahn. Our investments in network expansion ensure modern and climate-friendly mobility.”

Regine Günther, Senator for the Environment, Transport and Climate Protection: “Our investment offensive for the tram is making progress. With the M10, another tram line is being built in Berlin in the west of the city – where the tram had once been abolished – thus reliably and comfortably connecting entire halves of the city. Never since the fall of the Wall have there been so many tram projects as now. We will implement them in the coming years and make climate-friendly, city-compatible local transport ever more attractive – as a fast, punctual and comfortable alternative to your own car.”

Dr. Rolf Erfurt, Director of Operations BVG: “With the extension of the M10, we are creating an attractive direct connection from the growing district of Moabit to Prenzlauer Berg and on to Friedrichshain. And this is just the beginning, because in the future the tram will also play a much greater role in the west of Berlin. We look forward to building and operating more lines.”

The new line extends the M10 line from its previous terminus at Berlin’s main railway station via Invalidenstraße, Alt-Moabit and Rathenower Straße into Turmstraße to the underground station of the same name at the level of the Heilandskirche. Four stop islands and one cape stop, all completely barrier-free and equipped with a guidance system for the blind and DAISY displays, will be built along the new route. The investment costs for the construction of the new line will amount to about 33 million euros. More than 10,000 passengers are expected to use the new section daily.

During the total of 21 construction phases, about 4,400 metres of track will be laid in five construction fields along the line, and cycle paths, stops, catenary systems and a rectifier plant will be built.

The project “New construction of the tram line between the main station and the Turmstraße underground station” (project duration: February 2017 to September 2023) is funded by the Berlin Programme for Sustainable Development (BENE) with money from the European Regional Development Fund and the state of Berlin (funding code 1134-B4-T).

The planning approval procedure for the new tram line from the main railway station to the Turmstraße underground station in the Mitte district has been completed since the beginning of 2021. According to current planning, the new connection – from Warschauer Straße in the Friedrichshain-Kreuzberg district via the Pankow district of Prenzlauer Berg to Moabit in the Mitte district – will go into operation in the first half of 2023.

The new line will run from the main station through Invalidenstraße, Alt-Moabit street, then through Rathenower Straße and Turmstraße to the Turmstraße underground station on the U9 line. The line will have a total of four barrier-free stops in a central position, each with two access points, and the tram will mostly run on its own track bed. The new connection is expected to be used by up to 16,000 passengers daily. According to current plans, the construction costs amount to about 29 million euros.

The new line will provide direct connections every 5 to 10 minutes between the densely populated residential areas in Moabit via the Europacity urban development area north of the main station to the eastern inner city areas in Mitte, the Pankow district of Prenzlauer Berg and Friedrichshain-Kreuzberg. At the main station, there are connections to the long-distance, regional and suburban railway as well as to the U5 underground line. At the Turmstraße underground station, there is now a direct transfer to the U9 underground line. The entire route connects a total of six underground lines (U1/U3, U5, U6, U8, U9) as well as other S-Bahn lines (including S1 and S2), tram lines (including M13, M5, M8, M4, M2) and several bus lines. The route includes prominent sites such as the Wall Memorial, the Moabit Criminal Court, the Jahn Sports Park and the Natural History Museum.

The planning approval process was started by the Berliner Verkehrsbetriebe (BVG) in November 2017. As part of the participation process, the documents were open to the public from 27 November 2017 to 5 January 2018 inclusive and (due to an amended noise protection report by BVG) again from 14 October 2019 to 13 November 2019 inclusive at Tiergarten Town Hall.

The planning approval decision, which can be inspected from 25 January to 8 February 2021, only concerns the route of the tram – the road markings for cycle lanes and vehicle lanes are still being adapted to the new standards of the Berlin Mobility Act.

In the current public transport demand plan 2019-2023 and in the coalition agreement of the state government, an extension of the tram from the Turmstraße underground station to Jungfernheide station (regional, urban and underground) is planned. The length of the line is a good 3 kilometres. The corresponding planning has already begun. For the future, the connection Turmstraße – Virchow-Klinikum remains planned, which in a further planning horizon will create an additional connection between Moabit and Wedding as well as the north-eastern districts of the city.

The result of the comprehensive study, the route variant to be preferred in planning terms, was used as the basis for a decision in the Berlin Senate on 17 December 2019. The Senate approved the implementation of the tram route. Further planning steps will now follow (including preliminary planning and design planning) and finally the planning approval procedure, in which the route will be finally determined. Afterwards, construction can begin. According to the current status, commissioning is expected in 2028.