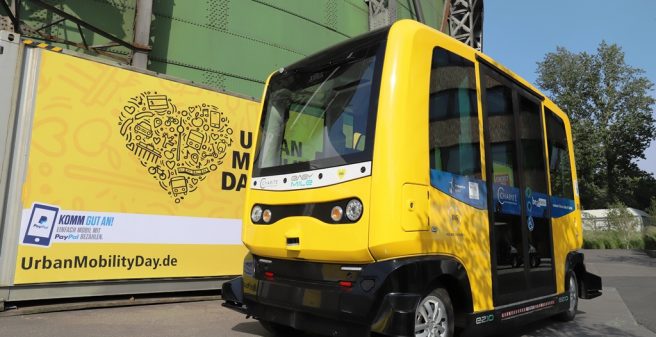 For the first time on 15 June 2019 the Urban Mobility Day took place in Berlin. Berlins public transport operator BVG, together with over 40 e-mobility and digitalisation companies showcased their latest solutions and technologies.

In addition to the two new Mercedes Benz eCitaro and Solaris New Urbino 12 electric electric buses of the BVG, different electric vehicles were on display at the so-called EUREF-campus in Berlin Schöneberg: boards, e-scooters, autonomous vehicles and electric cars in various variants were displayed. Visitors were invited to test the e-scooters and boards on a dedicated test track. In addition, presentations and panel discussions on new and future mobility concepts took place during the entire day.

The EUREF campus in Berlin Schöneberg is a research and development center for the fields of energy, mobility and sustainability. There are over 150 companies and institutions with more than 3,500 people working, researching and learning here.

The EUREF campus (https://euref.de/- abbreviation for European Energy Forum) is a model for the Smart City Strategy of the State of Berlin. The energy supply is climate-neutral thanks to a combined heat and power plant which is supplied with biomethane. There is also an intelligent energy grid, energy-efficient buildings, an electromobility testing platform and numerous research projects, such as Mobility2Grid (https://mobility2grid.de/). The aim of the campus, which started operating in 2014, is to prove that the energy transition is feasible and financially viable.

By coincident, the new “Regulation for the general approval of electric scooters” came into force on the same day in Germany. As a result in the upcoming weeks, several providers will launch so-called electric scooters or e-scooters for rental in Berlin. Up to eight providers are expected in Berlin alone. One of the providers VOI from Sweden plans to launch e-scooter services in over 30 cities in across Germany. Due to the opposition of pedestrian associations, it has now been regulated that the e-scooters have to be driven on the road or the bicycle path. There is no obligation to use helmets. The e-scooters are capable driving up to 25 km/h.

In the first quarter of 2019, BVG ordered 15 electric eCitaros from Mercedes Benz and 15 new Urbino Electric from Solaris. The buses are currently being delivered. The first new line 300, fully powered by electric buses, is scheduled to go into operation in August. It connects the Philharmonie and the metro station at Schlesisches Tor in Kreuzberg. The 15 articulated Solaris electric buses will later be used on the famous 200 line through the city center. It also runs unter the famous “Unter den Linden” street between Alexanderplatz and Zoo Station. The construction of charging stations is planned at both endpoints.

In the coming days BVG plans to announce the manufacturer for a further 90 e-buses. Thus, the number of electric buses of the BVG will increase to 140 until 2020. The objective is to replace all BVG diesel buses by emission-free buses by 2030. Additionally to the now used overnight and opportunity charging, BVG investigates to re-introduce trolleybuses with In-Motion-Charging (IMC) and batteries. A study is currently ongoing for the network of Berlin Spandau.

The project  “STIMULATE” (https://www.wir-fahren-zukunft.de/) is a project driven by BVG, the Charité Hospital and the Berlin Senate. The project consists in the testing of autonomous buses and began in May 2017 and runs until April 2020. Since spring 2018, four automated minibuses are operated on the Campus Charité Mitte and the Campus Virchow-Klinikum on three defined routes with fixed stops and a maximum speed of 12 km/h. At any time there is an companion in the vehicle who can intervene in an emergency. A total of four automated electric vehicles are used: two vehicles of the French manufacturer Navya (Navya Arma) and two vehicles of the also French manufacturer Easy Mile (EasyMile EZ10).

In September 2018, BVG started a ride-pooling service in Berlin provided with ViaVan, a joint venture between Mercedes Benz vans and the technology company Via. The service is offered within the eastern part of Berlin within the inner commuter rail service such as Mitte, Prenzlauer Berg, Friedrichshain and Kreuzberg. According to BVG, “Berlkönig“ is the world’s largest on-demand-shuttle provided by a public transport operator.

“Mobility from a single source” – this is the objective of the new Jelbi App by BVG. It has been launched on 11 June 2019. The goal is to link all modes of transport – from rental bikes and taxis to the metro with one single mobile app for the first time. So far, all transport providers such as carsharing companies, rental bikes, the BVG, the DB, the VBB, taxis and others had their own app, Jelbi is now to integrate all modes of transport in terms of route planning, reservation and payment process. Fare discounts in the use of different means of transport is not planned at the moment.

So-called “hubs” are created for an optimal transfer between the modes of transport. A first hub was built at the Prinzenstraße metro station. There are e-scooters, bicycles and six car sharing cars. Further hubs are planned at the metro station Jakob-Kaiser-Platz (near the airport Tegel) and at the tram node Landsberger Allee / Petersburger Straße. The hubs will also be equipped with toilets, Wi-Fi and parcel boxes, thus promoting intermodal mobility.

A similar app has been used since September 2017 in the Lithuanian capital of Vilnius. The system developed by the company Trafi is now also used in Berlin. In Vilnius, the Trafi app is also used to gather traffic planning data to better analyze traffic flows. The data is collected exclusively anonymously.

Soon there will be a navigation function for passengers on transport Apps. It will be used to inform the passenger when and where to get off or change and which connection leads the fastest from A to B. The new app was developed by the BVG together with the Deutsche Bahn (DB) and its’ subsidiary Mobimeo. The new functions have been seamlessly integrated into the existing BVG Fahrinfo app. With this extension of the driving info app, users will benefit in the future from a real navigation system for public transport. This provides the passenger with situation-relevant travel information and navigates him easily and intuitively to his destination. From the beginning of 2019, this offer will be tested in the BVG app with selected customers. Starting in the summer of 2019, the test will go into beta phase and will then be rolled out.

Under the slogan “How does Berlin move?” the project “BVG-Motion” started in 2018. It is managed by BVG and the Start-Up MotionTag. The pilot project records and analyses mobility patterns of public transport passengers anonymously by using an app. The aim of this digital mobility study is to gain insight into whether and how such data can be used in future transport planning and improvements. For this purpose, sensor and GPS data of the respective terminal are detected.