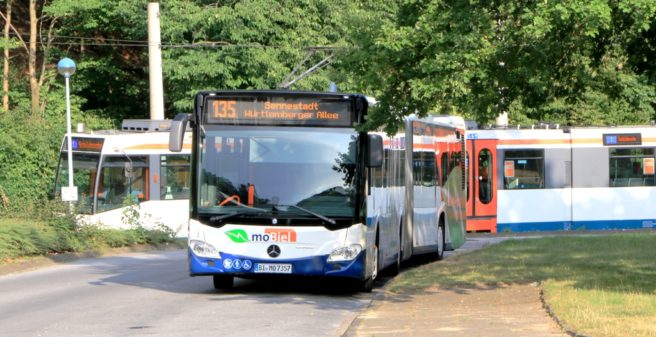 For decades, today’s Bielefeld district of Sennestadt has been promised a connection to the city’s tramway/light rail network. Originally, it was planned to include Sennestadt in the light rail network to be entirely converted to standard gauge more than 50 years ago, but all subsequent expansion plans as an extension of the meter-gauge Line 1 from the Senne terminus have remained unrealized ever since.

Now, the project of an approximately 6 km long extension from the current Senne terminus alongside the large Sennefriedhof (cemetery) in service since 1912, has gained new momentum. Various route options had been worked out and discussed in the press and in public. Experts from the Department of Transport, from the city’s public transport operator moBiel and from the planning and design office Rambøll have just presented the preferred variant, which scored best in the detailed evaluation. In addition, there were more than 500 responses as part of a citizen participation scheme, which had also to be taken into account. In the detailed evaluation, the “Am Stadion/Alsterweg” variant was convincing overall in terms of the criteria of economic efficiency, effects on climate and environmental protection, travel time and transfer frequency. It provides for the light rail to run parallel to the L756 to Kreuzkirche stop and from there along the Sennestadtring and Elbeallee to a new terminus at “Am Stadion/Alsterweg” in the northern part of Sennestadt. According to the current status, a further extension to Rheinallee/Württemberger Allee cannot be implemented as it is considered not economically viable and therefore not eligible for funding. The current bus route concept in the area will be adapted and improved, including new connection, e.g. on the Osningstraße between Senne/Buschkampstraße and Sieker.

Sennestadt was created as a new form of greenfield built urban area according to the set of criteria prevailing at the time. It was also well known as a model for the “car-friendly city” („autogerechte Stadt“) and is located approximately 10 km southeast of the center of Bielefeld. Public transport has always been provided by several bus lines, the main route of which connects with the Senne light rail terminus operating articulated buses.

Provided that further planning and the subsequent planning approval process continue at current pace, start of operation might be expected in 2026/27.

A network scheme of Bielefeld’s light rail (Stadtbahn) can be found here:
http://www.urbanrail.net/eu/de/bi/bielefeld.htm