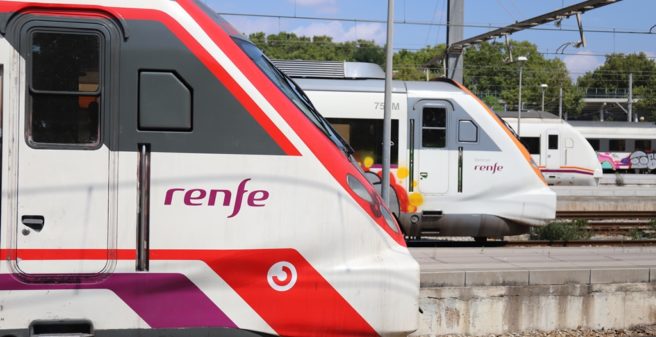 The Spanish state railways Renfe is in a buying frenzy: for almost 2.4 billion euros, more than 200 new local trains are being procured from Alstom and Stadler I © UTM

Renfe’s Board of Directors approved on 8 March 202 the award of the contract for the purchase of 211 regional trains for cercanías to the companies Alstom and Stadler for a total value of 2.445 billion Euros. Of the total number of trains, 176 will have a length of 100 metres each and another 35 will have a length of 200 metres.

In addition to the vehicles, both lots include the initial stock of spare parts and associated tools, as well as maintenance for 15 years. The maintenance services will be provided through joint stock companies (51% of the company awarded the contract and 49% Renfe Fabricación y Mantenimiento).

The new trains, intended for use in the major cercanías (suburban railway) networks, will have a capacity of at least 900 seats each (20% more than the current Civia trains). They will also minimise passenger boarding and alighting times through a modern design with at least 10 doors and spacious vestibules.

Increase in capacity by 20%

The new trains, intended for use in the major cercanías (suburban railway) networks, will have a capacity of at least 900 seats each (20% more than the current Civia trains). They will also minimise passenger boarding and alighting times through a modern design with at least 10 doors and spacious vestibules.

All trains will also be fully accessible to facilitate travel for people with reduced mobility and will have wifi and large multi-purpose spaces for bicycles and prams.

The vehicle procurement is part of the fleet renewal programme that Renfe started in 2019 to ensure the quality and improvement of the SPNV in the coming years, and in particular to renew 50% of the Cercanías and so-called “Media-Distancia” (regional and interregional) trains.

For Renfe, the procurement is the largest fleet investment in recent decades. The order volume totals more than 3.5 billion euros and will create about 52,000 new jobs, according to Renfe.

The first of these tenders was awarded last June to manufacturer Construcciones y Auxiliar de Ferrocarriles (CAF) for the supply of 31 metre-gauge and 6 mountain trains, as well as partial maintenance of the train fleet for a period of 15 years, for a total of €258 million. We reported here:

Similarly, Renfe plans to award contracts in the coming months for the procurement of 43 regional and 38 cercanías trains, all hybrid trains, for use on partially electrified and non-electrified lines in various autonomous communities. Similarly, a contract is to be awarded for the purchase of 40 powerheads destined for the various high-speed lines.

Rejuvenation of the railway fleet

The purchase of these trains will meet the foreseeable needs of rejuvenating the fleet, increasing reliability and reducing train breakdowns, increasing energy efficiency, and adapting to obligations to implement accessibility and increase safety in the railway system.

In this context, Renfe aims to reduce the average age of its rolling stock, especially in the Cercanías and Regionales fleets, some of whose trains are more than 30 years old and represent 80% of Renfe’s stock.

Renfe currently has a fleet of 1,016 trains for Cercanías, Media Distancia and Ancho Métrico (formerly Feve, metre-gauge), and since 2007 there has been no tender for the purchase of new trains.

The operational limit of the rolling stock in service is 40 years, an average age that has already been exceeded in some series of Media Distancia services, especially on the metre-gauge lines. Therefore, the operator has made the largest possible investments to modernise the fleet of trains destined for OSP.

The Spanish state-owned rail operator RENFE has awarded Stadler a contract to deliver 59 commuter trains, which also includes the spare parts and maintenance for 15 years. This award is one of the batches in the bidding for the high-capacity trains tendered by the Spanish operator. Stadler proposes to maximize the capacity by using double-deck coaches with a scalable length from 100 to 120 meters and from 160 to 240 meters. The Iberian-gauge trains will operate on 3 kV DC overhead lines reaching a maximum speed of 140 km/h. They will provide the commuter service in the largest Spanish cities.

This is the first time that RENFE will order trains from Stadler. The new trains shall be developed and produced in Stadler’s plant in Valencia. The contract envisages an option for 44 additional units as well as their maintenance.