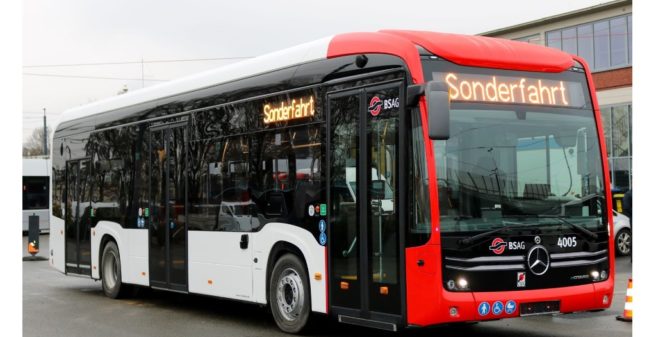 On 16 December, “Daimler Truck” – the new name of the commercial vehicle company of Mercedes-Benz – handed over bus no. 4005, the first of a total of 20 ordered Mercedes-Benz eCitaro, to Bremen’s public transport operator Bremer Straßenbahn AG (BSAG) at the Flughafendamm depot. Four more are on their way by the end of the year, with 15 more to follow in 2022.

The new electric eCitaro for Bremen

Bremen’s new electric buses are three-door vehicles. They have solid-state batteries, which have only recently become available and give the ebuses a capacity of an impressive 441 kWh. The buses have a charging socket on both the right and left side of the bus, which gives them maximum freedom in the depot: if you can’t get to a charging point from the right, you can certainly get to one from the left …

Mercedes not only supplies the buses, but also the charging infrastructure with five fixed charging columns and three mobile chargers.

The new electric buses are fully air-conditioned. They offer passengers seats upholstered with fabric in the colours red and grey of Mercedes’ own “City Star” type. Together with the interior wall surfaces of the bus covered with needle felt, this creates a pleasant ambience; Mercedes even speaks of a homely ambience.

At the front door there is a lift for wheelchairs, at the middle door the passenger finds two special use areas for wheelchairs and prams. There are also folding seats on the side.

In addition, a purchase contract for 24 more new buses was also signed. These will be 24 Mercedes-Benz Citaro articulated buses with Hybrid drive. The vehicles are low-emission and, thanks to their hybrid drive, save about one fifth of the diesel fuel compared to a conventional diesel articulated bus. They will comply with the “Euro 6 E” emissions standard, which will come into force next year (2022). In a way, the hybrid articulated bus enables the transport companies to make the transition from diesel to electric buses “peu à peu”.

Bremen’s BSAG has almost 350 buses and trams, which are used by approximately 300,000 passengers every day. The bus network includes more than 40 lines with a total length of around 500 kilometres. As early as 2025, 50 % of the BSAG bus fleet is to consist of zero-emission vehicles. The electricity used for this will be generated with hydroelectric and wind power.