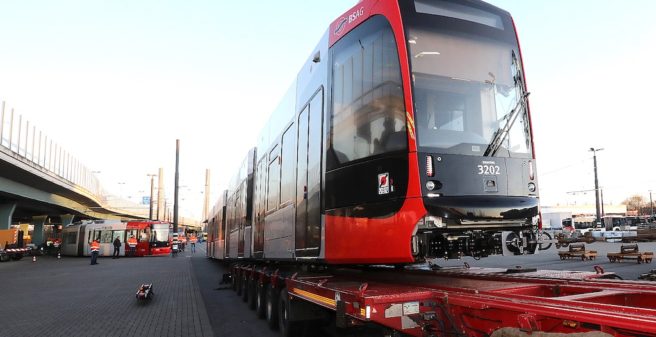 The first unit of Bremen’s new tramway Avenio arrived in Bremen on Tuesday morning, 31 March. A low-loader transport took the brand-new vehicles all the way from the Siemens plant in Vienna to Northern Germany, overnight in four stages.

The public presentation of the new model will not take place for the time being due to the current Corona contact restrictions. The operator Bremer Straßenbahn AG (BSAG) does not want to attract visitors and fans to come to to see the new tramway at the depot.

The BSAG ordered a total of 77 of these low-floor tramway sets for a total amount of 230 million EUR in 2017 – originally only 67 very planned, but the order was later increased again by 10 cars from a previously agreed contractual option. Initially, the livery should have started in 2019, but there were some delays in the production.

Within two years, all new trams are to replace the older GT8N low-floor models, which will no longer be refurbished and updated. From 1993 to 1996, then AEG (now Bombardier) delivered a total of 78 GT8N trams to Bremen.

Interestingly, the new Siemens Avenio has a similar architecture as the GT8N with four cars based on four central turnable bogies. This is also the reason why the new fleet will be called GT8N-2 locally. The approximately 37-meter-long tram carries up to 259 passengers and has a top speed of 70 km/h. Large windows and energy-efficient LED lighting provide pleasant lighting conditions. Multifunctional areas at the entrances offer generous space for wheelchairs, baby strollers and bicycles. An air conditioning system ensures a pleasant, draft-free interior atmosphere throughout the year. On-board wireless Internet and information systems provide additional passenger comfort. The Avenio also reflects the latest advances in sustainability: the tram is up to 90-percent recyclable. The Avenio uses a large part of its recovered braking energy for heating or feeds it back into the power grid. All wheels are equipped with sound absorbers to ensure smooth and low-noise operation.

According to information from BSAG and Siemens.