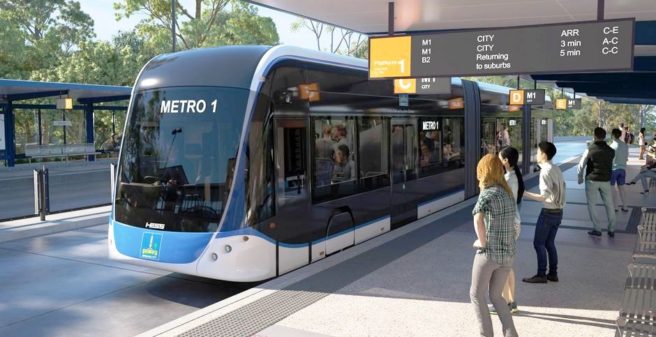 Approximately two million people live in in the city of Brisbane and the greater metropolitan area – located on the coast in the “sunshine state” of Queensland in northeastern Australia. The vast majority of cities with similar sizes already operate some kind of mostly track-guided inner-city public transport systems, and now, after a long period of preliminary planning and design studies, a high-quality urban transport system is under construction in Brisbane, too.

The decision was made to build initially two lines of an all-electric bus rapid transit (BRT) system, which will operate double-articulated electric buses largely using its own-right-of-way on dedicated lanes. The Brisbane City Council is the contractor of the system and promotes it as “Metro”. Two partially overlapping lines, Metro 1 and Metro 2, will run from Eight Mile Plains to Roma Street and Royal Brisbane and Women’s Hospital to University of Queensland. Both lines will provide access to the main downtown axis. The street layout will be redesigned and completely changed at various points, and a tunnel section along Adelaide Street with an underground station is also included. Victoria Bridge will be closed for general vehicular traffic, only public transport and pedestrains will be allowed in the future. The new Brisbane Metro BRT system will offer interchanges to the existing Northern Busway along its approximately 21 km route, as well as connections to the electric suburban rail network of Queensland Rail, which provides services to the surrounding metropolitan area on 1067 mm-gauge tracks with a total of 10 lines. A new inner-city tunnel section, the Cross River Rail Project, is also under construction.

Following the “Brisbane Metro Draft Design Report” which was published in September 2018, the contract for vehicles and charging equipment was awarded to the Swiss company Hess in September 2019, with subcontracted parts supplied by ABB and the Australian company Vogren. Infrastructure construction civil works were awarded in October 2020 to a consortium called Brisbane Move, comprising ACCIONA and Arup, with the City Council responsible for all major civil engineering works and associated final design under a so-called ‘Collaborative Partnership’. Approximately AD 1.244 billion will be the total investment cost for the entire project, of which the Council will contribute AD 944 million. The remaining AD 300 million will be provided by the central government.

The manufacturer Carosserie Hess AG from Bellach in the Swiss canton of Solothurn has won the tender to deliver 60 double-articulated vehicles of its type “LighTram 25” to Australia.

Some technical data of the vehicles:

The vehicles will be charged via pantographs using the conductive fast-charging system called “TOSA” at four fast charging terminals along the lines with 600 kVA each. In addition, CCS 2 plug-in slow charging is foreseen at the depot overnight.

The vehicles offer a capacity of up to 180 passengers witha low-floor design of the entire cabin which guarantees a convenient entry and exit at four double-width doors. A further, smaller door provides access to the separate driver’s cab.

The delivery of the first pre-production vehicle is scheduled for 2022. The bus will be tested in Switzerland first and will then undergo extensive trial runs and tests in Brisbane before the final go-ahead is given for the start of series production of the remaining 59 vehicles.

The first section of the new BRT network is expected to be inaugurated in early mid-2023, with both lines fully operational by the end of 2024. During the day, the frequency on both lines is planned to be so intense that no detailed timetable will be published. Even on weekends it is planned that the system will offer 24-hour round-the-clock services.

Future development steps include the extension of the Metro services to other parts of the city, including Chermside, Carindale and the Brisbane Airport. These extension ideas are not just subject to the construction of the necessary busway infrastructure but also to the available public funding.

Very interesting! And a nice success for Hess.