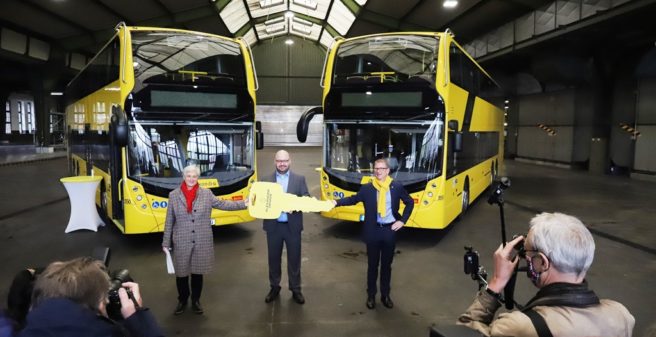 Handing over the keys for the first two Alexander Dennis ENviro500 double-decker buses with (from left to right): Eva Kreienkamp, Chairman of the Board of Directors of BVG, Stefan Baguette, Marketing Manager of ADL and Dr. Rolf Erfurt, Director of Operations of BVG I © UTM

Double-decker buses have been an integral part of the Berlin cityscape for over 100 years and it is hard to imagine the city without them. The double-decker buses are not only popular with tourists, but also with the local population. The first two prototypes of the new double-decker generation were presented by Berliner Verkehrsbetriebe at the Wedding bus depot (which actually used to be a tram depot) on Wednesday, 21 October 2020. The premiere took place under the motto “A Scot strengthens the fleet”. This is due to the fact that the new buses are developed and produced by Alexander Dennis, whose headquarters are located in Scotland. The new Alexander Dennis Enviro500 has room for 112 passengers and, like its predecessor, has three doors and two stairs to the upper deck, is 2.55 metres wide and 4.06 metres high.

For passengers, the Berlin version of the Enviro500 offers some extras and innovations compared to the previous double-decker generation. In addition to the USB charging sockets that have already become standard in every row of seats and a live view of the seat occupancy in the upper deck, there is also a new type of interior lighting that adjusts its colour tone to the outside temperature.

LED luminaires are installed on the stairs and on all steps in the lower deck to ensure safe pedalling. Large monitors show the upcoming stops, transfer options and other information. One of the monitors is oriented opposite to the direction of travel. The multifunctional compartment in the middle of the carriage provides secure space for prams or two wheelchairs. Desire to stop buttons with acoustic feedback and ribbed handrails on all doors are intended to provide visually impaired passengers with better orientation when entering and leaving the car.

The premiere in the depot Wedding

Eva Kreienkamp, the new Chairman of the Board of Management of BVG, Dr. Rolf Erfurt, Director of Operations BVG and Stefan Baguette, Marketing Manager of the manufacturer Alexander Dennis presented the two prototypes to the media representatives. For Eva Kreienkamp, it was her first big appearance since she joined BVG. She is just getting to know BVG Berlin and is of course also looking forward to the new bus fleet.

Stefan Baguette stressed that the Enviro500 for Berlin was based on existing double-decker buses, but also met all the specific requirements for operation in Berlin. Alexander Dennis has already delivered over 18,000 Enviro double-deckers worldwide, but the variant for Berlin has some “Berlin” specialities. These include a height of 4.06 metres (standard is 3.9 to 4.4 metres, in Great Britain a maximum of 4.2 – 4.3 metres), the resulting comfortable interior height, the seat layout, the length of 13.8 metres (ADL standard is 11.2 – 12.8 metres) and of course the interior design and the BVG passenger information system. Most importantly, the propulsion chain has entirely been changed in comparison to Alexander Dennis’ standard buses: it is a combination of a 6-cylinder Mercedes Benz Euro 6D engine with 354 PS/260 kW, Voith transmission and ZF axles.

One of the two prototypes is due to go into trial operation within the next two weeks on Berlin’s “flagship” 100 between Alexanderplatz and the Zoologischer Garten railway station. The second vehicle will tested by BVG technicians for a while yet. This is because, depending on the performance of the new buses, BVG intends to order 198 series vehicles from Alexander Dennis by the end of the year. In October 2018, the BVG board of directors decided to order 198 vehicles after successfully completing the test and trial programme with two buses. This provides the vehicle manufacturer with acceptance security. The first 25 new double-deckers could thus be delivered by the end of 2021. By the end of 2022, all 200 double-deckers should be delivered.

It is still unclear where the Enviro500 series will be produced. While the two prototypes were assembled in the British ADL factories, there were already rumours about alternative production locations outside the UK in the run-up to the presentation. According to ADL, due to the unclear legal situation in the Brexit negotiations, no statements can be made at this time.

Changes in the BVG fleet

BVG operates a total of more than 1400 double-decker and single-decker buses of various designs, of which about 1300 are its own and more than 100 are operated by subcontractors. The double-decker buses currently used are mainly the three-axle MAN A 39. A total of 416 MAN A39 were purchased between 2005 and 2010. At present, just under 300 of these buses are still in daily use. Some vehicles have already covered over a million kilometres (!) and are still in use thanks to good maintenance. BVG will continue to invest into its rolling stock as it plans to take a decision in the tram tender before the end of the year.