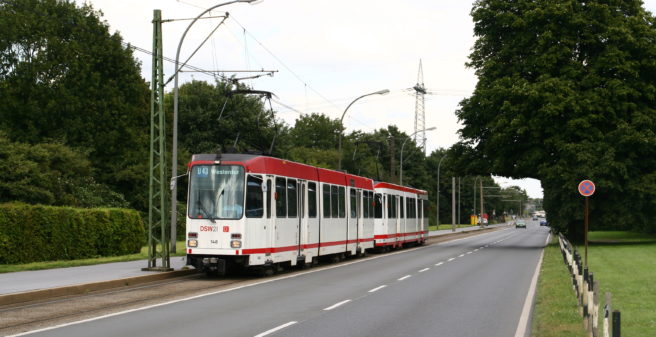 Dortmund’s light rail network still uses a few sections that still resemble the traditional interurban routes alignment so typical for tramways in the Ruhr area for decades. Today’s line U43 to Wickede, which runs along the old, medieval trading route called “Hellweg”, still features this alignment in part: there are several single-track sections with frequent passing loops and some very narrow street-running passages in the suburbs of Asseln and Wickede.

The route has been partially modernized and rebuilt to double track in the past, and now another 1.2 km long section is being reconstructed in the same way, to segregate motor traffic from the tramway which will get its own right-of-way between Asseln, Businkstraße, and Brackel, In den Börten, including one intermediate stop at Döringhoff.The construction work should be completed in the spring of 2021. Intersections between the motor traffic and the tramway will be reduced and consequently the operations will become more steady, which in turn will make the services on the Wickede route more attractive for passengers.

The following photographic review illustrates a part of the history of the Hellweg line, whose operations started in 1906 in two sections  – first to Wickede and then to the neighboring town of Unna. At that time, it was initially operated by the “Elektrische Straßenbahnen des Landeskreises Dortmund” as well as other interurban lines in the Greater Dortmund area. All of which were were later integrated in the municipal tramway company. From 1909 to 1939, there existed a connection to the Unna-Kamen-Werne tramway at Unna station. The section line of the Dortmund-Unna Hellweg route between Wickede Bahnhof via Massen to Unna was converted into a bus service on 31 March 1965, and the depot in Wickede closed its doors for the last time in 1974. Closures of other parts of the route were discussed during the 1960s and 1970s, but fortunately they are no longer on the agendas of local and regional policy makers.

Today’s terminus at Wickede station was created when the line was withdrawn from Unna in 1965. There was (and is) no passing at this point. Until 1965 trams travelling to Wickede initially terminated at the passing loop next to the former depot. After its closure in 1974, a new stub track was created at the post office in Wickede a few hundred metres before the final terminus at the railway station, which was used by every second tram to Wickede, to allow for sufficient pause for the drivers in Wickede. This situation has not changed today.

Almost 115 years ago, the service to Unna started as line 4, later then renumbered to 12, and in 1941 it became line 9. For the 1955 summer timetable in May 1955, the 9 between Dortmund Hbf and Wickede was supplemented by a new line 19 to increase the frequency. This continued to exist after the withdrawal of the 9 to Wickede station on 31 March1965, despite having now the same route, and was only abandoned in April 1966.

The long lasting terminus at Dortmund Hauptbahnhof (central station) was abandoned with the introduction of the new summer timetable in July 1964, and both lines were extended via Kampstraße to Dorstfeld. During the rush hour, a new line 29 was added operating between Nicolaikirche to Wickede. Starting with the summer timetable of 1969 there was a line swap with the “2” at Dorstfeld and the “9” became a long cross-town service between Wickede and Marten. The 29 disappeared on this occasion. There were also other lines on the part of the line facing Dortmund with lines 2, 12 and 22 to Brackel and Wambel. With the introduction of the Rhein-Ruhr transport network (Verkehrsverbund VRR) in 1980, it was initially rebranded as line 409 followed by number 408 and subsequently number 403 some years later. Since the opening of the last inner-city tunnel section in 2008, service U43 is operating the route to Wickede.

It is still a classical tramway on the easternmost section, even if it is called “U43” (U stands for the German word U-Bahn = Underground (Untergrund) Line). Today, double-set low-floor tramcars of Bombardier’s latest-generation are in use.