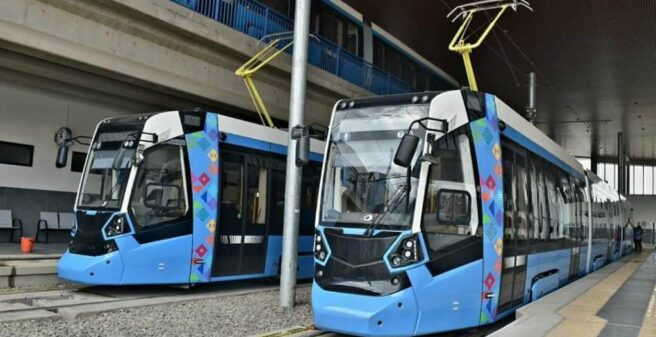 The first stage of the green line is about 15 km long, the red line about 7 km, and in the future there will be a total of 42 km and three lines – that’s Bolivia’s first light rail system, which started revenue service in the city of Cochabamba on 13 September 2022.

Even the President of the Republic, Luis Arce, participated and drove the first train! The Bolivians are proud of their new means of transport. Stadler had delivered 12 three-section, eight-axle articulated low-floor vehicles from its factory in Minsk in bi-directional design under the model designation “Metelitsa” – very similar to some vehicles delivered to St. Petersburg in 2017/18. They offer up to 376 standing places (at 8 pers./m2) and 66 passenger seats, with low-floor throughout, over a total vehicle length of 33 metres. Four traction motors provide a total of 420 kW of power.

The new, balanced cars run on a network that is largely independent of existing roads, partly at high altitude, and on long stretches uses the tracks of former railway lines that have long been abandoned. Some of the lines are (for the time being) single-track only. Currently, 12 stops are served on the green line and 7 on the red line – so the distance between stops is comparatively long. Overall, the system can best be described as light rail by European standards.

Another network scheme you may find here:
https://www.urbanrail.net/am/cocha/cochabamba.htm

We had already reported on the system in detail before it started operation here: