Coimbra: The electric Metrobus is coming 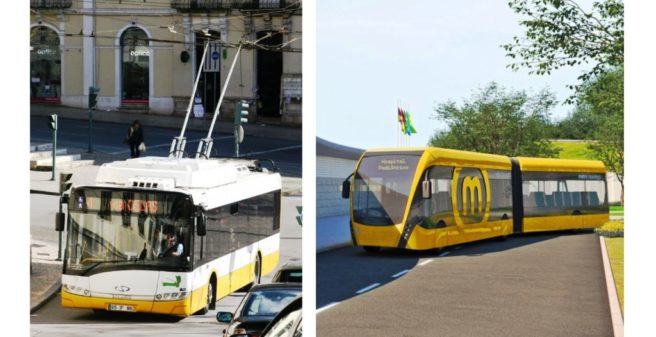 No tram-train and uncertain future for the trolleybus

The old Portuguese university town of Coimbra, picturesquely situated on several hills on the banks of the Rio Mondego, is the starting point of a remarkable regional public transport project. The realisation of the project has dragged on for over two decades and is now, after long years of standstill, moving forward in a completely different format than once planned.

Planning of a Tram-Train system to replace the railway

The TramTrain system under the name “Metro Mondego” was supposed to solve this problem. A project company had already been founded under the same name in the nineties. In addition, the construction of a branch line through the lower city in a large loop up to the university and further on via the Cruz de Celas junction to the elevated university hospital was planned.

Initial preparatory work began in 2008/09, and in 2010 rail traffic finally ended on the regional line to Serpins. All tracks were removed, the route was prepared for the new standard gauge tracks and the stations were adapted accordingly. Low-floor vehicles were put out to tender for operation, but in the first round no bidders were found who were in a position to meet the specified technical and, in particular, economic, i.e. monetary, requirements.

The first preliminary construction work had also been done in the city area, and everything looked like the project would be realised – despite repeatedly voiced concerns regarding the enormous investment costs of almost half a billion euros. The main point of criticism, apart from the financial concerns, was the expected limited development effect in the urban area, which still necessitated bus transport on numerous routes.

Ultimately things turned out differently. The severe economic crisis that hit southern Europe particularly hard about 10 years ago caused a drastic reduction of all public infrastructure measures. This included the end for the Metro Mondego in its planned form. Since 2011/12, all construction work was suspended; on the the Serpins route, bus replacement services remained on the existing roads with significantly longer journey times.

In the following years, various options for the future of the project were controversially discussed. A complete abandonment was out of the question, if only because of the investment of approximately 106 million euros already made and of course, because of the recognisable need to improve public transport services in the long term.

BRT as an alternative

Finally, the conversion of the route of the former branch line for future use as a Bus Rapid Transit (BRT) system and the completion of the urban branch line according to the same criteria emerged as the option of choice. “Metrobus” is now the name. As a bus on its own route with priority at signalling facilities, it now may be possible to use at least parts of the system effective in March 2024. In addition to the reconstruction of the route for bus traffic, there will be adaptations to the stop facilities, including the addition of various new stations, especially in the urban area of Coimbra, and last but not least the new branch line to the hospital HUC. The urban route uses city streets, some of which will be closed to car traffic. These include, among others, Rua Pedro Rocha, which will be jointly used by the BRT and the city’s trolley and diesel buses in future. In urban area, the route will have two lanes, while the outer route will partly consist of one single lane on the fromer railway track bed with passing loops. The electrified shuttle service of the state railway on the branch line between Coimbra B main station and Coimbra A city station will also be replaced by the Metrobus in future. However, it remains quite difficult to understand why the direct connection of numerous regional trains from the nearer and further surroundings to the city centre has to be cancelled – the rail service is scheduled to end in November 2023.

At the Coimbra B long-distance station, passengers will have to change to the metro bus, although the metro bus could certainly reach the city centre on a different route than using the existing, electrified railway line.

For the operation, 40 battery electric buses – including 13 articulated ones for the city line – will be put out to tender again after a first tender process did not meet the expectations. The BRT system is thus also intended to present itself positively as an environmentally friendly transport service compared to private transport. The first new vehicles are to be delivered in the second half of 2023.

As the BRT is now moving forward in steps, recent statements from the city administration have once again raised doubts about the future of the city’s trolleybus system. Coimbra had the oldest such system on the Iberian Peninsula, but its operation has looked rather neglected for a very long time.

The service originally opened in 1947 and over the course of several decades replaced almost all lines of the former metre-gauge tram. The expansion continued in larger steps until the beginning of the 1990s, at which time the decision was made quite suddenly to abolish it in view of rising energy prices. Newly electrified sections were discontinued and the network drastically reduced. It is most surprising that this reduced service managed to stay in operation for nearly 30 years. Two route, no. 4 and 103, have been in service for the last 10 years. Although there have been occasional restrictions and longer interruptions in service, the purchase of a first Solaris low-trolley bus in 2009 and the reopening of a disused line have given some hope. However, those responsible could not decide on a thorough modernisation, and in the meantime the need for renewal of the infrastructure and especially the vehicles is more than obvious. However, this also applies to the rest of the bus fleet of the municipal transport operator Serviços Municipalizados de Transportes Urbanos de Coimbra (SMTUC). Currently, apart from the only new vehicle (Solaris Trollino no. 75), the trolleybus operation has only four operational Caetano/EFACEC vehicles (no. 54, 55, 58 and 63) at its disposal, which have meanwhile reached an age of about 39 years. In contrast, some Chinese battery buses were procured.

Since 23 March 2021, trolleybus services have again been suspended due to road work, while one of the two substations is also in urgent need of repairs. Given that one substation is sufficient for the current operation, the SMTUC intends to resume the service in the coming months. However, a decision on political level is still pending.

From an outside perspective, the integration of the trolleybus operation into the Metrobus concept seems to make total sense. However, the fact remains that both systems will be operated separately by two different companies, despite both being owned by the public sector. A repeatedly mentioned possibility of preserving the trolleybus as a technical monument on partial routes in light of the age of the vehicles also seems very concrete at present.

Under the given general conditions and in view of the limited funds available, the construction of a bus route largely on the city’s own track with a direct connection to the city centre appears to be a thoroughly acceptable solution, even though rail transport could certainly offer advantages here as well. The current estimated costs for the Metrobus are EUR 129 million, compared to about EUR 480 million for the once planned and initiated light rail system.

The performance of the BRT electric buses, especially range of the battery capacity on the intercity route, remains to be seen. On the other hand, the neglect of the remaining trolleybus system, which could be transformed into a modern system with comparatively manageable effort and easily integrated into the new BRT Metrobus system, seems incomprehensible. State-of-the-art battery trolleybuses with the possibility of travelling longer distances away from the overhead line, but with a much greater range than pure battery buses, would be ideal for use in the urban area, which is characterised by steep gradients. However, these considerations do not play a role in Coimbra at this time.

Horse-drawn trams ran in Coimbra between 1874 and 1885 on standard gauge and since 1904 on 900mm, before they were replaced by metre-gauge electric trams in 1911. The network was extended, with a new line to Tovim being added in 1954, but this disappeared again in 1977, and on 9 January 1980 the last two lines, 3 and 4, ran for the last time. Until the end, there were only old-fashioned two-axle trolleybuses, some of which have survived in the local transport museum (which has been closed for years). Portugal’s first trolleybus took over various tram routes for a while, but today it is only a small part of the city’s transport system.

The history of the trolleybus system: