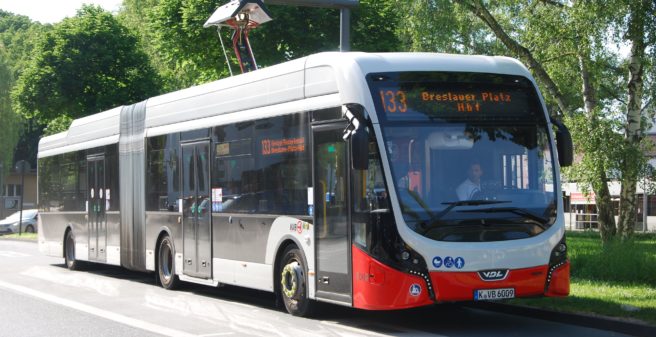 In December 2016, the Kölner Verkehrs-Betriebe (Cologne Transport Authority “KVB”) commissioned its first electric bus line 133 between Breslauer Platz and Südfriedhof (Höninger Platz). On this occasion, the Dutch manufacturer VDL initially supplied eight articulated cars of the type VDL Citea SLFA-181/electric (no. 6001 to 6008) followed by a ninth (no. 6009) in 2018. The buses are designed for opportunity charging via roof-mounted pantographs at the two terminals of the line.

The first eight electric VDL Citea were delivered at the end of 2015. They were extensively tested for about a year. A short time after start of operation, the KVB announced that its availability rate was at 95% – equal to the availability of a diesel bus. Revenue service on route 133 began in early December 2016.

Today, KVB emphasizes: “We are very satisfied with the reliability of our existing VDL electric buses.” And KVB is also very pleased with the fact that they have been awarded the “EBUS-Award”.

Additional 53 electric buses have now been ordered by KVB for a significant expansion of the electrification of the overall Cologne bus network. From 2021 onwards, lines 141, 145 and 149 in Cologne on the left bank of the Rhine as well as lines 150, 153 and 159 on the right bank of the river will be converted into electric service. Because of KVB’s high degree of satisfaction with the electric Citea fleet, the contract has once again been awarded to VDL.

48 articulated ebuses “Citea SLFA-181/electric” will be delivered as well as five 12 meter ebuses of the “Citea SLF-120/electric” model for one of the lines. The new vehicles are scheduled to arrive in Cologne in November 2020.

Charging infrastructure for 53 electric buses at the depot Nord

KVB illustrated the construction works within its depot Nord on 12 December, where they presented the construction site that will eventually provide the necessary charging infrastructure. The buses will use so-called “charging ports” (car ports – side-open halls – with charging stations on the ceiling). There will be two large halls for the articulated buses and one for the five 12 meter buses. The KVB emphasized that the design of the reloading halls with a roof makes a lot of sense, because electrical components of buses and charging stations are thus optimally protected from weather influences.

KVB also announced the electrification of line 126, operating between Bocklemünd and Chorbuschstraße – from end to end a 16 minute journey. The partners in this project are interesting: KVB, Cologne’s energy supplier “Rheinenergie” and … Ford!