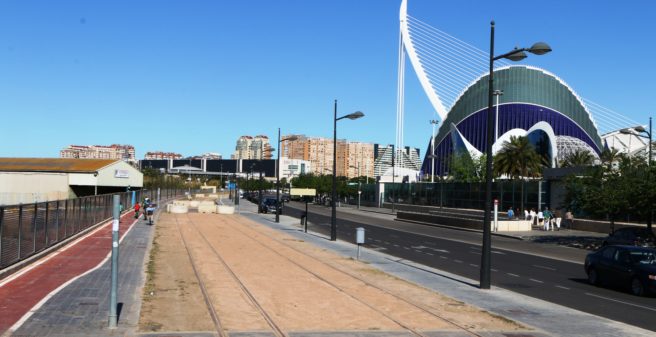 In Valencia, construction work resumed in late 2019 on the long time “forgotten” tramway route to Nazaret. After an interruption of more than 8 years due to budget constraints after the financial crisis in Spain new funds in the volume of EUR 25 mn were recently awarded for the completion of a crucial tunnel section.

The 5.3 km long future line T10 will run between Alacant station in the city centre and the suburb of Nazaret. There will be 8 stops, 3 of which underground: Alacant, Ruzafa y Amado Granell on the 2.05 km tunnel section. The line connects also with the” Ciudad de las Artes y las Ciencias” (Science and Art City), which is also heavily frequented by tourists. The entire line was partially completed in 2011 when all works had to be stopped. On surface, most of the track was already in place at that time and the tunnel was under construction.

The next steps in the following months are to award the electrification work and to speed up the installation of the signalling technology in order to be able to finally open the line in 2021 – ten years behind schedule. For the time being, the new line 10 will not have any connection to the remaining metre gauge lines of Valencia’s tramway and metro network, and subsequently a provisional depot and maintenance facility will be built. A connection between Nazareth and the terminus El Grao/Marina Real of the tramway network is only planned at a later stage.