Dancer: Electric buses made in Lithuania 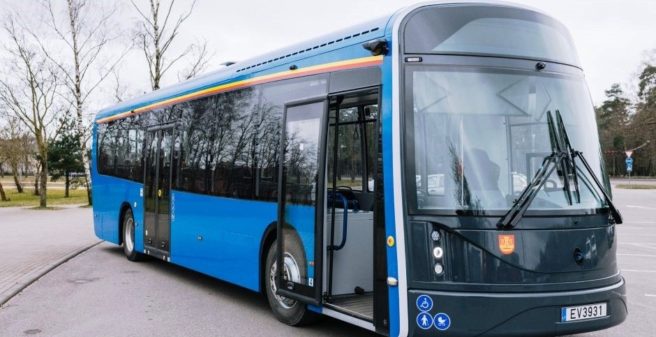 Since 14 April, three prototypes of an entirely new electric bus are in service on bus line 8 in Lithuania’s third largest city, Klaipeda. The new bus manufacturer is called “Dancer”, whose production site is also located in Klaipeda.

First thoughts about the new “Dancer”

It all started when Alvydas Naujekas, now CEO of „Vejo projektai”, disclosed his first conceptual ideas on the construction of an electric bus with a particularly low tara weight. His considerations were straight forward: an electric bus should be environmentally friendly by any means , because the lighter an electric bus is, the less electricity it will consume on the ride and the less storage capacity is needed for electricity. Consequently, smaller batteries can be used.

Ramanauskas’ philosophy is best illustrated in the current slogan of the Dancer brand: “Make cities a better place to live.”

Thus Naujekas began to develop this new, full-electric city bus with a “super-low” weight. The University of Klaipeda also played a vital role in the development right from the beginning. Dancer speaks of a “visionary project in the automotive industry”. According to Dancer’s judgment, public transport is considered as an integral part of any city’s environmental efforts. In order to consume as little energy as possible, the bus frame of the vehicle is made of new and light materials.

The final product is very impressive, in that the unloaded bus weigth is just above 9.8 tons . Dancer achieves this by using “composites”, in other words, plastic materials for the body. This material is not only particularly light, but also environmentally friendly because it is made of recycled materials, e.g. pre-used PET bottles!

In addition to the low net weight of the bus it was also decided to use “green” energy for the bus services. Last but not least, the “Dancer” can also be distinguished from its competitors in that the battery recharging time lasts only a few minutes.

The year 2015 marks a significant development step. The development team bought an old Skoda 14 Tr trolleybus, disassembled it and rebuilt it as a battery electric bus with a composite body. Amazingly, the net weight of the “renovated” car was 57% lower than its original with a steel body.

2016: the first prototype of the Dancer

After these impressive results from the conversion of the Skoda 14 Tr, the first prototype of the Dancer E-bus was built in 2016. It was granted EU-wide approval for public use in 2019.

In 2019, Dancer decided to reload its electric bus via “opportunity charging”, i.e. via a pantograph that climbs from the roof of the bus to the charging station. The car is recharged with 500 kW in less than ten minutes. Dancer emphasizes that this is totally in line with usual waiting times at the final stop of the bus routes.

The technology of the Dancer

In addition to the particularly low net weight of the bus, the Dancer features a single-tyred rear axle, because it does not have to carry much weight. The manufacturer emphasizes that the vehicle is almost vibration-free and very quiet on the road. Instead of conventional rear-view mirrors, the bus has cameras to do the job and they are programmed to automatically brighten the image they transmit in the dark thanks to “night vision”.

The bus car can carry up to 93 passengers (32 seats plus 61 standing places). This is a very good number for an electric bus.. Inside the car there is also a wheelchair space, which can be reached with a wheelchair ramp. For the comfort of passengers, the dancer comes with air conditioning and USB charging ports.

The full scope of the product delivery offered by Dancer also includes the maintenance of the buses. Furthermore, the company also provides the necessary recharging infrastructure if needed. Dancer sums it up as follows: “We are often compared to Tesla. Both companies have rethought the traditional bus construction approach. But a Dancer bus can be recharged 15 times faster than a Tesla. It carries more passengers and it consumes less energy.” The newcomer from Lithuania does not suffer from a lack of self-confidence..

The bus manufacturer Dancer belongs to the “Véjo Projektai” group. 80 jobs were created including electricians, electrical engineers, software developers and mechanics. “Véjo Projektai” emphasizes that the majority of European cities now procure electric buses. “The market potential is immense. To be competitive, we need to be at the top and build light, more economical and easy-to-maintain buses. “

For its future electric buses, Dancer is aiming for a further weight reduction. In addition, the energy consumption of the vehicles will be further reduced.

As mentioned above, the three buses for the city of Klaipeda were procured by the municipal transport company. They have been in service on line 8 since 14 April. Klaipeda’s Mayor Vitautas Grubliauskas commented as follows: “April 14, 2020 will be recognized in the history of Klaipeda”. And
Vaidotas Ramanauskas, general manager of Klaipeda Bus operator (Klaipedos autobusu parkas) added:”With the start of the era of electric buses, we are opening up a new page in the history of our transport operations.”

A word about the optics of the Dancer

You will have to get used to the appearance of the Dancer – simply because it is unusual: The front design is very rounded up and the rear part is slanted, which differs significantly from what we are used to see in other bus models around the world. Let’s see how long it takes to get used to this new bus design!