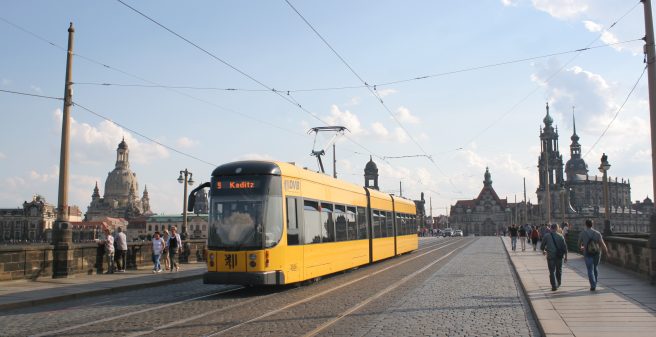 Dresden’s tram rolling stock consist mainly in low-floor vehicles already. This NGT D8DD, seen on the famous Augustus bridge, is one of 40 vehicles built by Bombardier Transportation in 2006 – 2008 has a width of 2.30 meters. The next vehicle generation will be 2.65 meters wide and will therefore offer higher passenger capacity and comfort. Foto: Urban Transport International

In 2017, the public transport operator of the city of Dresden (DVB AG, Dresdner Verkehrsbetriebe AG) started the procurement process for a total of 30 new low-floor trams. The decision as to which manufacturer will win the tender is expected to be made in the first quarter of 2019. The subject of the tender is the delivery of 30 vehicles in two variants of a modular and standard vehicle type. The trams shall be delivered in the period from 2021 until december 31st 2023. 21 of the vehicles are to be delivered as unidirectional vehicles whereas the remainder is to be designed as bi-directional cars. The biggest novelty to the already existing trams in Dresden is the vehicle width. The vehicles used today are 2.30 meters wide while the new trains will be 35 centimetres wider, therefore totalling 2.65 meters. This provides more space and comfort in the interior. In particular, a 2 + 2 seating will be installed instead of today’s 2 + 1 seating. This means that two seats are arranged to the right and left of the corridor.

Replacement and extension of the tram fleet

The aim is to replace the older Tatra high-floor trams and to prepare the replacement of the oldest, already over 23-year old low-floor trams. At the same time, a modernization and retrofitting programme is planned for some of the NGT 6DD trams. The “retrofit” is intended to improve passenger comfort and information in the car, remedy constructive weaknesses and eliminate obsolescence issues.

Adaptation of the tram network for 2.65 meter wide trams

In order to meet the loading gauge requirements of the new 2.65-meter-wide tram fleet, DVB AG has been adapting its track network for years by increasing the center-to-center distance between the tracks to three meters. However, it is not planned to rebuild the platforms for the new trams. That would be far too costly and would also require the retrofitting of the old trams with sliding steps to fill the gap between the vehicle and platform edge. Also, DVB has a very interconnected network and will not allocate specific vehicles to a specific line. Therefore the new 2.65 meter trams will have to fit into the existing stops. It is planned that the car bodies will have a width of 2.30 meters at the height of the platform and then grow into the width of 2.65 meter above the platform edge in a bulbous shape.

The procurement of new vehicles is also accompanied by the further expansion of Dresden’s tram network. The network now has a length of 134.3 km and is operated by 12 lines, totalling an operational length of 213.1 km. Nevertheless, important traffic axes are still operated by diesel buses. The “Stadtbahn Dresden 2020” program therefore foresees several light rail extension projects that have already been promoted via the city council. The following three projects have been prioritized and are already partially being implemented:

The bus line 61 between Löbtau and Strehlen shall be replaced by a tram. It is carrying 32,000 passengers per day and is one of the busiest bus lines in Dresden. The construction work began in 2017, but it has been interrupted due to a judicial construction freeze. In july 2018, the construction started again. The 6 km long route links the city centre with the neighbourhood of Strehlen east-wards where a new multimodal connection between tram and commuter rail (S-Bahn ) is to be implemented. As a result, the existing tram lines 9 and 13 will be rerouted in order to connect to the station in Strehlen.

The tram loop Bühlau – Ullersdorfer Platz is an issue today. There is not sufficient space for transfers between train and bus and the traffic situation is a danger for residents and passengers. The project foresees therefore to relocate the  is planned the terminus in Bühlau. One possible solution would be an approximantely 0.6 km long extension of tram line 11 to the eastern edge of Bühlau-Weißig. Thus, the track loop would migrate from Ullersdorfer Platz to Rossendorfer Straße. The change between tram and bus would then be possible because of short distances without crossing the road at Ullersdorfer Platz. At the new tram terminus at least 165 P + R parking spaces could be set up. The project is still in the planning stage. A decision regarding financing is planned in 2019.

Bus line 62 shall be converted to tram operation. Today, it links Plauen in the south of the city with Johannstadt in the east and carries about 23,700 passengers per day. Weekdays the extralong 21-meter buses are circulating in 7-minute intervals.

On behalf of the City of Dresden, DVB is currently reviewing the possibilities for the construction of tram line 5 to Dresden Johannstadt. If a decision to build the line can be taken in 2019, it is assumed that the line will be realized by 2030.