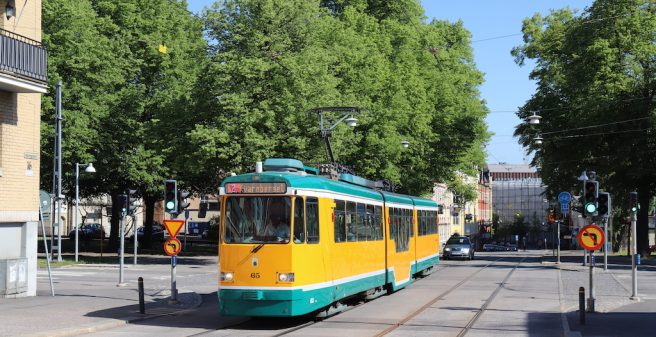 For more several decades, large numbers of second-hand tram cars, including many of the well-known DÜWAG type, have found their new home abroad as second hand trams. Tram enthusiasts might primarily think of Eastern European countries, but even in Northern Europe older German articulated vehicles can be found.

The Swedish city of Norrköping has one of only two municipal tramway systems which had survived the nation-wide policy to abandon electric city transport in the 1960s during the shift from left-hand- to right-hand traffic. Norrköping has some 130.000 inhabitants and it operates two cross-town tramway lines, which cover around 50% of the city area. The network has a length of 18.7 km and is operated by Veolia Transport within the Östgötapendeln franchise, covering tram, bus and train operations. After years of discussions about the long-term future of the system, today nobody questions that the tramway is a substantial part of Norrköping’s transport mix. Most recent network expansions date back to 2006-2011. At the same, the city started a fleet renewal program with the acquisition of new low-floor trams: 16 Bombardier “Flexity” (called here M06) trams which are almost identical to the Flexity S-type trams in Frankfurt/Main, are in service today. These vehicles replace the last of the ASEA- four-axle cars bought new in 1967, when the entire country changed to right-hand traffic. However, 9 rebuilt DUEWAG articulated tramways of the same age are still part of the operating fleet and can be seen in Norrköping’s streets today.

The story of the DUEWAG in Norrköping started in the 1990s when the operator planned to modernize the ASEA M67 four-axle trams. A short-term replacement was required and due to economic considerations second-hand cars were sought to be the best solution. Duisburger Verkehrs-Gesellschaft (DVG) in Germany offered 8-axle cars which were no longer needed after the inauguration of the central city tunnel in Duisburg. They all had the standard DUEWAG design of the GT8 type.

15 such vehicles were shipped to Sweden since 1994. 10 of them were converted into 6-axle cars (GT6) already in Duisburg. It is worth mentioning that all of them had been delivered by DUEWAG as GT6 in the 1960s and were converted into GT8 only a few years later. The cars proved to be extremly successful in Norrköping, leading to the decision to also modernize the DUEWAG trams and operate them alongside the ASEA’s.

The operator started another conversion program, by adding low-floor middle sections, thus re-converting the trams into 8-axle cars once again and equipping the vehicles with a chopper propulsion by installing the electrical equipment into cubicles in the interior. The front panel was also redesigned and the interior modernized. Duisburg’s only remaining car of that generation, no. 1000, was used as the model for this front redesign. Some years later, Norrköping no. 61 received another facelift, but no other trams were converted into the the new design. In Norrköping the DUEWAG’s are named M97-type trams.

Not all of the cars were delivered straight away to Norrköping from Duisburg. Some of them had an intermezzo in Dessau or Essen, and two trams were used as a source for spare parts only.

Now the operating life of the DUEWAG in Sweden is coming to an end in the near future: The operator has signed an agreement with AB Stockholms Spårvägar, the operator of Stockholm line 7, to take over their 6 Bombardier Flexity (which are identical to the ones in Norrköping) as soon as the new CAF Urbos low-floor trams enters into service here. Nevertheless it is very likely that some of the ex Duisburg DUEWAGS will survive. Norrköping has further expansion plans and the operator is known for having a sufficient vehicle reserve which might lead to an extension of the DUEWAG’s lifetime. Recently, the GT8’s are receiving an updated livery. The dark yellow is being replaced by a lighter yellow which corresponds to the original yellow color from the network opening in 1904 – apparently an old paint-pot with the original color combination was found and used to produce new pots. Nevertheless, the color scheme, which is inspires from Mülheim/Ruhr color scheme in Germany, remains unchanged.

A long-term survivor in Norrköping will by no.71, which was rebuilt into a 6-axle „party tram“ years ago and still wears the original DUEWAG front design.

Of the various other second-hand acquisitions which were observed in Norrköping during the past 20 years, currently only the two out of three prototype MAN/ AEG GT6N are still in the depot, but have not been in service for several years. The three prototypes were purchased in 1999 and 2001 and in service until 2012 approximately. After the network voltage has changed from 600 to 750 V, the vehicles are not operational any more. Several attempts were made to update the (old) software – unfortunately without success. The GT6N were only able to run at low speeds under 750 V which lead to the last operations in 2015. All other second-hand cars have been sold or scrapped. Further details can be found in the following table.

DUEWAG already out of service in Norrköping:

Other German second-hand acquisitions in Norrköping: