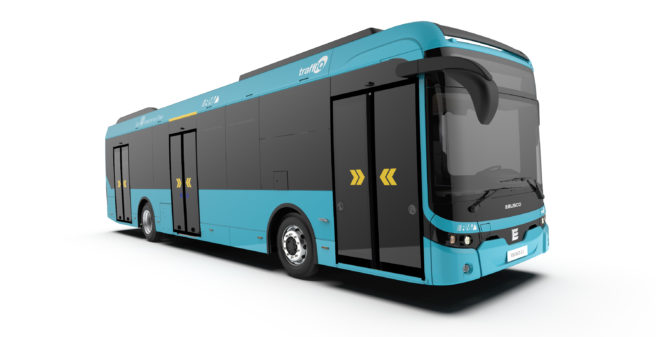 Ebusco, still a relatively young “start-up” from Deurne in the Netherlands and specialising in electric buses, reports a remarkable order from Germany. Thirteen “Ebusco 2.2” will be delivered to Alpina Frankfurt, a subsidiary of the Transdev Group, by the end of 2020 and will operate with the livery of the municipal Frankfurt transport service company “TraffiQ” starting in December 2020. The new electric buses will replace diesel buses that have been used by TraffiQ.

Transdev has chosen Ebusco, among other criteria, because of the expected wide range of its e-buses. This significantly reduces the total operating cost, because no infrastructure for opportunity recharging on the bus routes is necessary – the ebuses are expected to do an entire workday shift way (charging stations on the line). A minimum range of 350 km is expected.

These 13 buses will be the 12 meter Ebusco 2.2 buses, low floor version., with three entrance doors. These buses are already operating in several German cities (amongst others in Munich, Wartburgkreis Eisenach, DB Regio Bus Münsterland and on the island Borkum, in addition to an order of four for Bonn) and in Dutch cities (such as in Groningen, Dordrecht and Utrecht). Another 156 will be driving in the Dutch cities of Haarlem and Amsterdam at the end of 2020, that will be operated by Transdev the Netherlands.

Frankfurt’s “TraffiQ” wants to switch all bus traffic in the city to alternative drives by 2030. “Alpina” is involved in the operation of the so-called line bundles A and G.

Ebusco relies on Lithium iron phosphat accumulators (LFP technology). The manufacturer highlights that this is one of the safest and best battery technologies for electric buses. In addition, the company is constantly working weight reduction of the batteries.