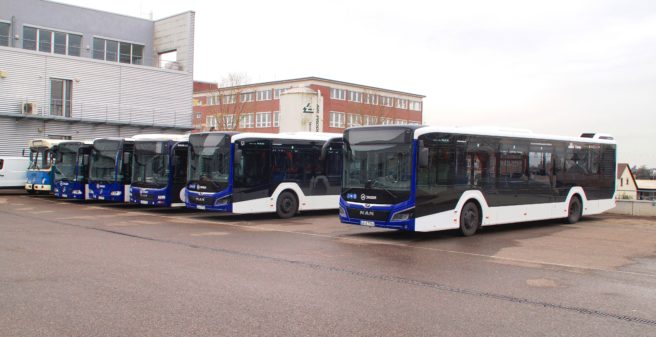 The Jäger family has been offering regular bus services in Ludwigsburg since 1926. The company bears the name LVL, which stands for Ludwigsburger Verkehrslinien. A bus rental service and a travel agency are also established next door. In 2008 the travel business is sold. The name of the travel agency Jäger has already been part of the company name LVL Jäger GmbH for some time.

Currently 220 people work there and will maintain 88 buses; the youngest have only been in the fleet since 14 January 2020; the largest investment in the company’s history was the purchase of 50 MAN Lion’s City Efficient Hybrid; the first 25 were delivered by 13 December 2019 and the second half in the new year. They are equipped as standard with a stop-start function and can recover the energy released during braking. LEDs provide impressive brightness and good visibility inside and out.Other buses in the fleet are one MAN Lion’s City Hybrid, 10 Solaris Urbino 12 Hybrid and 14  MAN Lion’s City with Euro-6-Diesel, some Mercedes-Benz Citaro O 530 and one recently acquired Göppel bus for the single remaining Göppel G11 passenger trailer.

Managing director Buchholz herself also has a bus driving licence. In an interview for our Urban Transport Magazine she thanks for the excellent support and help to deliver these new buses in time. She expressly and praisefully emphasizes the team in Korntal-Münchingen. For LVL Jäger, the new large number of modern, low-emission and quiet buses was very important for the timely conversion to the new route concept for the start in January 2020 with the 10-minute interval. Newly added are the lines 415, 420, 428, N47 and N48. In total LVL operates 26 routes.

LVL Jäger has opted for the new seating concept with optimised seat spacing; all passengers benefit from air conditioning and easy accessibility is ensured, as all 50 new buses and the 36 other buses have electric wheelchair ramps. The new MAN and the 14 from 2015 and 2016 each offer two wheelchair spaces. The general design of the driver’s workplaces are the same in all buses at LVL Jäger and so it is now easier for drivers to handle buses from different manufacturers well and easily. Currently, the Swabian family business operates its fleet of 88 buses from MAN, Mercedes-Benz, Solaris and Göppel.

The advantages of the new buses for the population of Ludwigsburg with its 93,000 inhabitants are clear lower noise and pollutant emissions. Carry Buchholz, Managing Director, says: “We are setting a new standard in urban transport in Ludwigsburg, Kornwestheim, Remseck and Asperg and we remain true to our credo of always acting in the interests of our customers.”

Impressive was the statement of a bus driver about the family feeling in the company; he has Turkish roots and his father already worked here as a driver, as well as two of his brothers and he has also been a driver with LVL Jäger for almost 20 years. In a further article, we will go into more detail about changes in the organisational structure of the family-owned medium-sized company, which are not very visible to the outside world, and describe the way to achieve this in more detail.

So far a Renault ZOE is still the only pure battery electric vehicle (BEV) in the LVL Jäger fleet yet; the purchase of eBuses is also being considered in Ludwigsburg. In addition, Carry Buchholz lets us see what the funding promises will be and we will report on this when everything is in place!