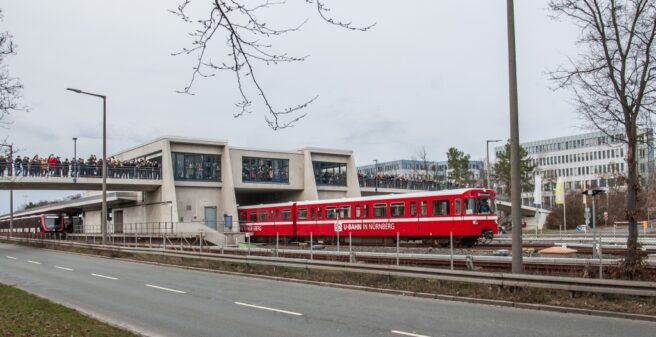 At the beginning of January 2023, the last two metro (U-Bahn) trainsets of Nuremberg‘s DT1 series were retired from active service by VAG Verkehrs-Aktiengesellschaft. Unlike 62 other trainsets of this generation, VAG will continue to maintain these two vehicles and use them for special events, rent them out, but also run them in everyday service to grease the tracks.

VAG did not want to take out of service the “Pegnitzpfeile”, as they have often been affectionately called, without a sound after 50 years of service: Therefore, the two remaining trains operated once again in passenger service on Saturday, 14 January 2023.

At the Scharfreiterring underground station, VAG board member Tim Dahlmann-Resing reviewed the history of the Nuremberg underground and in particular that of the first series. He also referred to the importance of the metro for Nuremberg. With the new articulated trains from SIEMENS, VAG has a very good replacement, said Dahlmann-Resing.

We last reported here on the new G1s, which have now all been delivered and are in operation: https://www.urban-transport-magazine.com/en/50-years-of-metro-and-a-new-tram-nuremberg/

A look into the history: U-Bahn for Munich and Nuremberg

On 24 November 1965, after years of discussion, the Nuremberg City Council decided in favour of a classic underground railway, which was to run largely underground on its own track. In the summer of 1966, the city council decided to join the considerations of the Munich Transport Authority for underground trains and to procure uniform vehicles together with Munich.

With the decision, the width and length were fixed. The single double railcar was to be 2.90 metres wide and 18 metres long. While Munich had decided to couple up to three double railcars due to the higher forecast of passenger numbers, Nuremberg limited itself to two, which were to travel not only as short trains but also as so-called long trains. From the beginning, the platform and carriage heights were optimally adjusted to each other so that people in wheelchairs could board the train without assistance.

The first two double units were delivered to VAG on 4 November 1970 from the manufacturer MAN in Frankenstraße via railway tracks directly to the new Langwasser underground depot. VAG received a total of 64 vehicles of the DT1 series over the years. The first delivery consisted of 14 vehicles, like the next 18 vehicles, they all had a direct current drive. The third series, which entered service between 1979 and 1984, was equipped with a much more robust and efficient three-phase drive. With this, the Nuremberg VAG definitely wrote technological history. It was the driving force behind this innovation, which only had operational advantages because electricity could be fed back into the conductor rail during braking. Direct current and three-phase current powered trains could be coupled together.

The trains of the third series, however, had a few special features: The two car sections of a double railcar were given windows above the close coupling. This allowed passengers to see from one carriage section into the other, which they found pleasant. The destination displays were automated using so-called roller conveyor systems instead of the directional sign boxes, which had to be manually loaded with each change of direction. Eventually, VAG installed the automatic roller conveyor systems in the two older vehicles as well.

The vehicles of the DT1 series proved to be extremely robust and durable. They ran between 3.5 and 4.5 million kilometres. This mileage has only been possible because because of the intensive care in VAG’s workshops over five decades.

VAG started looking into a replacement strategy for the old underground cars as early as 2010. A long planning and procurement process followed, which is normal for rail vehicles. At the end of last year, VAG was finally able to put the last of 35 new articulated trains (G1) into passenger service. Until then, however, the trains from the 1970s had to be used as long as possible, both economically and technically. However, with the foreseeable use of the G1 trains, the workshop refrained from carrying out repairs on the DT1s that were not absolutely necessary for cost reasons. This was only possible because the workshop team had great know-how and a lot of experience with the vehicles and the components. Trains that were taken out of service served as spare parts storage.

All DT1s were able to remain in service until their planned end of life – with the exception of one double railcar, which was destroyed by fire. The vehicles of the first series were professionally recycled from 2010. With the exception of two trains, which will be preserved as museum trains. One was built in 1975 and originally had car numbers 443/444, now 587/588; the other, built in 1984, started life with car numbers 523/524 and now has numbers 575/576. They are now retiring from scheduled service after 48 and 40 years respectively.

As the DT2 series was already taken out of service some time ago, the Nuremberg underground now only has two underground generations in service, the DT3/DT3F for automated operation and the new G1.