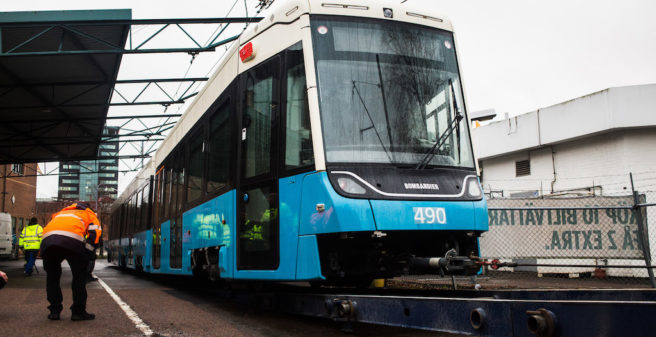 In the early morning hours of Friday, 13 December 2019, the first out of 40 new Bombardier Flexity low-floor trams arrived in Göteborg. The so-called M33 tram started its journey in Bautzen, Germany, at the plant where the series is built. The new trams will replace the oldest trams of Göteborgs Spårvägar which are the M28 and M29 built between 1965 and 1972.

Before going into service, the tram will be tested for at least 20,000 kilometres before final approval. The second tram is expected to arrive in Göteborg in spring 2020. Once the first two trams have been approved after test driving, the series delivery for the remaining 38 trams will start.

The three-section low-floor tram is a classic bogie tram with low-floor interior. The tram has a length of 33 meters and offers 75 seats and space for 155 standees (refering to the uni-directional variant). 10 out of the 40 trams will be built as bi-directional trams in order to be more flexible during traffic interruptions. The first one delivered, numbered 490, is a bi-directional vehicle.

Västtrafik and Göteborgs Spårvägar expect the delivery of all trams to be completed in 2022. In addition, the agreement gives the option to procure an additional 60 trams. This includes the possibility of ordering 45 meters long trams which would be four-section vehicles.

Ridership of Göteborg’s tram system is consistently increasing. Between January and October 2019, ridership increased by 8 % or 8.7 million trips. The forecast for 2019 is 141 million trips.