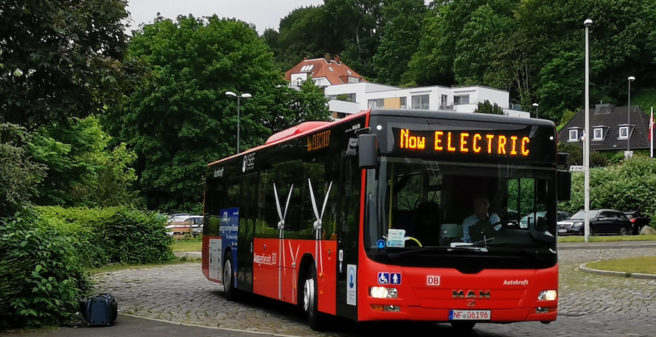 Converted from diesel to electric: The first bus will start operation in June at Autokraft in Northern Germany I © Gundo Sanders

The DB regional subsidiary Autokraft GmbH operates almost 500 of its own buses in Schleswig-Holstein and about as many through subcontractors. The operator wishes to implement sustainability strategies. With I_SEE Electric Busses GmbH Autokraft has found a partner who is able to convert used diesel buses to e-buses.

For Autokraft’s 75th birthday, the converted e-bus has now been presented. The Anniversary celebration will most likely be postponed to next year or the year after. On 11 June, the CEO of Autokraft, Dr Arne Schneemann, and DB Regio bus director Frank Klingenhöfer presented the first converted ex-diesel bus MAN Lions City (12 m) as a pure e-bus to the press in Schleswig-Holstein’s capital Kiel. Schleswig-Holstein’s Minister of Environment, Jan-Philipp Albrecht and Economics Minister Buchholz also participated at the event.

Schleswig-Holstein is Germany’s wind power house and the local government is seeing opportunities to charge the e-bus batteries with unused wind energy and thus to become a driver of mobility innovations. The conversion of the e-bus was made possible by the vehicle engineer Andreas Pfeffer with his company I_SEE Electric Busses GmbH which we already presented here: https://www.urban-transport-magazine.com/en/retrofitting-instead-of-new-built-conversion-from-diesel-to-electric-buses/

Mr Pfeffer and his team looked for high-quality components from established suppliers, such as the batteries from Webasto and the electrical drive from Ziehl-Abegg. The wiring has been „self-made“ in the workshops of Enge-Sande. There are also other ideas emerging on the GreenTEC campus, see below. With Ziehl-Abegg, I_SEE was present in Brussels at Busworld last October. The company had generated great interest from worldwide bus operators. Kiel’s Autokraft is the launch customer.

With Ziehl-Abegg, I_SEE was present in Brussels at Busworld last October. The company had generated great interest from worldwide bus operators. Kiel’s Autokraft is the launch customer and the bus has already been presented then, but not yet in running condition.

This climate-friendly conversion was carried out with the support of the EU (EFRE), the federal-state community (GRW) and with funds from Schleswig-Holstein pilot project “PilUDE” – pilot for converting diesel buses to electric drive. With its branch in Schleswig-Holstein in Enge-Sande, EurA AG developed a project management system for this purpose, applied for funding, managed the project and was also responsible for public relations.

On the GreenTEC campus in Enge-Sande, where the bus was converted up to the TÜV approval, 17 km of private test roads are available, where electric and automated vehicles can be tested in a variety of ways. The bus comes from the Autokraft branch in Flensburg. Three more buses will be converted by the end of 2020, at least one of which may even be an articulated bus.

The first bus that is now ready will be used in Niebüll, in the district of North Frisia, primarily for school transport from the end of June.

Regarding the anniversary, the head of Autokraft explained that his company also feels a responsibility for the future and does not ignore key questions. It was true that all autofus buses still ran on diesel, but the company deliberately looked for cheaper and quicker solutions. Because the manufacturers could not meet demand at the moment and resource conservation and independent supply sources are therefore very important to them. The display also shows the driver well and precisely how energy-conscious he is driving and handling his batteries.

The conversion was done in 4 days, explained Andreas Pfeffer from I_SEE electric busses GmbH. I_SEE stands for „I understood“ and that is how the trained internal combustion engineer sees himself in order to act in for the society and himself. He estimates that the cost of the e-bus will be as high as a conventional diesel bus. By feeding unused wind energy, the business case will be even better and the costs per kilometer lower. If Pfeffer’s order books continue to fill up with the Autokraft, there will also be further economies of scale, which will then further improve the competitiveness of the solution.

The cooperation under the leadership of I_SEE and Andreas Pfeffer is now also working on other makes of diesel bus. At the event, it was mentioned that the first used Solaris diesel buses are on their way. The conversion does not have to take place in Schleswig-Holstein. The concept is designed in a modular way so that appropriately trained teams in established facilities can implement this at any location in Germany and elsewhere and thus a faster ramp-up of e.buses is possible as the capacities of the established manufacturers are at their maximum. Talks for new contracts are ongoing and interest in the I_SEE solution is currently particularly high in southern Lower Saxony.

From Schleswig-Holstein to the world

GreenTEC Campus boss Marten Jensen also emphasized that e-mobility is the future and that he and his colleague Windmüller do not like that their wind turbines are sometimes shut down despite sufficient wind. A single rotation of modern wind turbines could allow this new e-bus to continue its school bus ride for 10 km. And if it is connected directly to the wind turbine, instead of having to stand still, it can be produced at very low cost for e-buses. And further thought, the buses could also feed the stored electricity back in the event of a breakdown, for example, and illuminate a street for a night to provide safety.

We will soon report about the 75-year history of Autokraft, in which Deutsche Post was also involved for several decades. The new e-bus will also get an electric vehicle license plate; due to Corona, this was no longer implemented in time for the presentation on 11 June. The bus carries the vehicle number 11004 within Autokraft’s bus fleet.