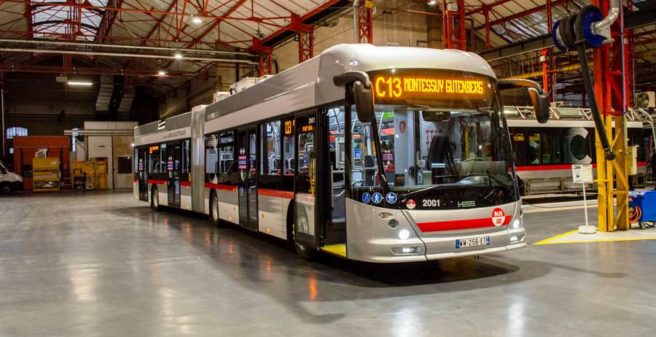 Presentation of new HESS trolleybus no. 3001 at Alsace depot | © Sytral

For many years, Lyon had France’s largest trolleybus system. Since the closure of several routes in the 1960s, it has experienced a significant modernisation and expansion over the past two decades.

Today, this network is the basis for yet another considerable expansion of electric bus transportation in the near future. The municipal administration as well as local politicians have agreed to an investment package that not only provides for the procurement of a fleet of modern trolleybuses with powerful traction batteries, but that also includes the use of these vehicles on various routes that were previously served by diesel buses. Accordingly, the vehicle fleet will be significantly expanded compared to today. The catenary network will also be expanded, but longer stretches of the new lines will be managed without overhead lines: the trolleybuses will then also run in pure battery mode. The batteries will be recharged automatically without any loss of time during the journey under the sections covered by the catenary – a concept which is known as In-Motion Charging (IMC) and which is already in use elsewhere. This offers completely new options and possibilities for this traditional mode of public transport.

Currently, the delivery of the ordered 34 articulated trolleybuses from Swiss manufacturer Carosserie Hess in Bellach is already underway – the first trolleybus numbered 2001 started regular service on the line C13 on 19 February 2021. This route connects the 8th district of Lyon (Grange Blanche) with Caluire (Montessuy) and sees more than 27,000 daily users. Currently operated with standard 12-metre trolleybuses, the gradual introduction of the new vehicles by the end of April will increase capacity by almost 30%. Starting in May, line C13 will be fully served by the new HESS articulated trolleybuses, which are capable of covering up to 40% of the route in battery mode without overhead wires. Line C11 will follow in September.

The regional transport authority Sytral, together with the operator TCL launches a tender to purchase another 102 articulated and 53 two-axle trolleybuses (IMC) in the next 5 years. A framework agreement with a validity of 8 years is foreseen. All new vehicles will not only service the current trolleybus lines (C1, C2, C3, C4, C11, C13, C14, C18) and replace all of the current Cristalis ETB 12 and ETB 18 trolleybuses built between 2002 and 2010 in the medium term, but with this order several current diesel bus lines will be converted into battery trolleybus operations. This will take place in various steps between 2022 and 2026. According to the revised planning, diesel bus lines C6/C6E and 19 will be converted at the beginning of 2023, line C5 in 2024 and lines 25 and C25 in 2025. The conversion of diesel bus line 38 (Part-Dieu – Caluire Bascule), which was originally envisaged, too, ist currently not considered anymore, at least nor for the medium-term. Today’s trolleybus fleet of 127 vehicles will thus grow to at least 190 in the future.

At the latest by 2026, lines C1, C2, C3, C5, C6/C6E, C11, C13 and C25 will be operated by articulated trolleybuses, while 12-metre trolleybuses will mainly operate on lines C4, C14, C18, 19 and 25. The future use on the short route S6 with its steep gradients and tide curves has yet to be decided, the 7 MAN/HESS midi-trolleybuses built in 1999 need to be replaced by new vehicles, which most probably must be tailer-made as currently no such trolleybus models are available in the market.

The expansion of the trolleybus system is part of a comprehensive public transport programme which includes, among others, expansion of different rail systems, r the creation of new dedicated bus lanes and the purchase of larger series of gas buses in order to completely phase out diesel bus operations by 2026.