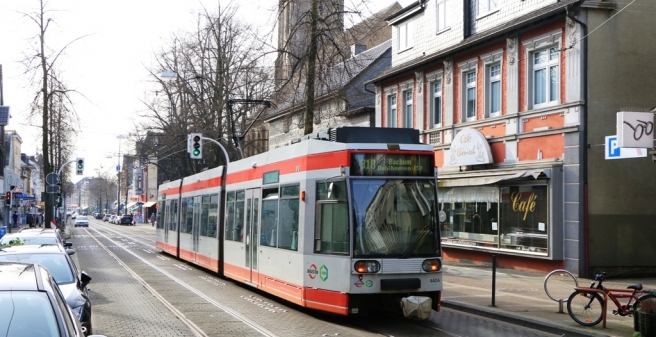 The first generation of low-floor trams of the Bochum-Gelsenkirchener Straßenbahn (BoGeStra) will soon be part of the company‘s history: Since 1992-1994 in service, the 42 articulated tramcars of the MGT6D series will be replaced by new Varionbahn vehicles from Stadler and completely eliminated within a year from the operating service. After long-lasting quality and stability problems with the carbody, including months out of service of the various vehicles and subsequent speed limit to 30 km/h, resulted in BoGeStra’s management decision to replace all of them with new vehicles, even if the originally planned lifetime of 30 years is far from being reached. The series is expected to be completely out of service even before the last of the 1976/77 built high-floor M6S articulated vehicle will be replaced. Germany-wide a total of 339 MGT6D trams and variants have been produced by Duewag, Siemens and (partly) DWA in the years 1990 – 2000 for 12 cities, including Bochum. Several operators such as the ones in Düsseldorf and Brandenburg/Havel are currently refurbishing their trams.

However, most of the vehicles still find re-use abroad. In 2017, the public transport company MPK in Lodz, Poland, took over the car 441 and submitted it extensive testing. Meanwhile, the sale of 35 of the once 42 cars-strong series has been agreed upon. From the remaining 7 vehicles which had already been retired previously, one has been used as spare parts donor to the neighboring tram in Mülheim; six ended up at a scrap yard. Today, 15 of the trains have already arrived in Poland, seven are already in the service and another 20 are still on the tracks of the BoGeStra , being mainly used on lines 308/318 and occasionally on line 306. Since the new Variobahn trains from Stadler also run in Bochum, passengers are now able to compare the different designs. After some adjustments, the MGT6D hopefully run for many more years.