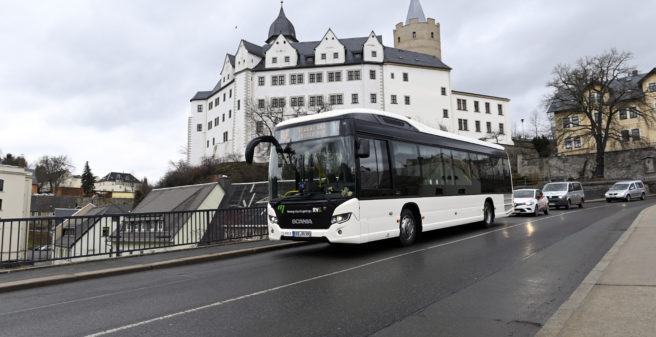 The new Scanias have a parallel hybrid drive, which allows them to operate also in pure electric mode.

Luc Moulin, “Director Sales Buses” of Scania Germany / Austria: “It doesn’t always have to be a fully electric bus. A bus with hybrid technology also reduces fuel consumption and thus helps to improve the environmental performance of its transport operations.” Especially for interurban services, the hybrid bus is a forward-looking alternative, because it saves fuel on a large scale. The higher purchase price of the hybrid bus is compensated by the reduction in consumption by more than 20%. Sören Wünsche, Head of Technology at the Regionalverkehr Erzgebirge, confirms: “Tests of a Scania Citywide Hybrid on our routes have shown that the car consumes more than 20% less diesel compared to a conventional diesel bus.”

Moulin adds that the RVE from Annaberg-Buchholz is well positioned as a company to be Scania’s first hybrid bus client in Germany as the company has its own workshop and already is an important service partner for Scania.

RVE Managing Director Roland Richter adds: “With the new Scania hybrid buses, e-mobility is now also making its way to RVE.” The RVE is not only rejuvenating its fleet with these buses. “Thanks to their lower fuel consumption, they significantly improve our ecological footprint.”

The federal state of Saxony partially funds the purchase of the new hybrid buses with a subsidy of 70% to the additional costs for hybrid technology.

The new Scania hybrid buses will mainly be used on the long “plus-bus lines”. This is a quite new service in the federal state of Saxony offering short headways on each route. RVE expects the new Scania to achieve between 40,000 and 80,000 kilometers per year. “If we save 6 to 8 liters of diesel per 100 kilometers, the additional costs for the purchase of the hybrid buses will already be paid off after just four to five years. Considered in life-cycle terms, these buses are even cheaper for us.”

The five new “Scania Citywide 12 LE Hybrid” of the RVE are equipped with the “Scania Telematics”. Thanks to this software, the black box in the vehicle, the “Scania Communicator”, always communicates the latest data in real time to the operation. Constant fuel consumption control is one of its features, among others. If expectations are met, RVE plans to purchase more hybrid buses this year. In addition, a tender for 20 low-floor diesel buses is currently underway.

Scania announced that sales of its bus models with alternative propulsion increased by 46% in 2019.