Fleet modernisation for the 50th Anniversary of the Mexico City metro 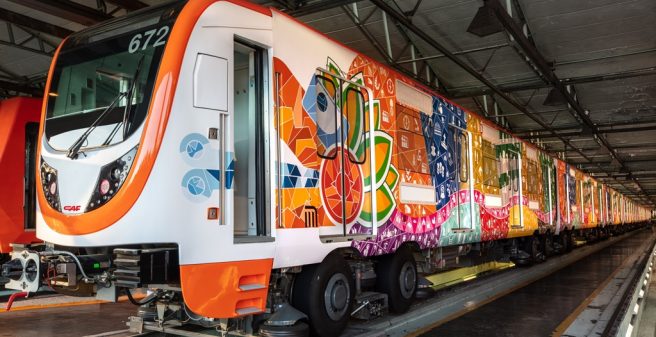 The new NM-16 trainset for Mexico City has a length of 150 m and has been decorated with the indigenous Quetzalcoatl deity for the metro's 50th anniversary I Photo: CAF

Just in time for the 50th anniversary of its’ metro, a total of 10 new metro trains is being delivered to Mexico City. The 9-car trainsets are used to reinforce and replace the original rolling stock from the 1960s and 1970s fleet on the line 1.

The first new so-called NM-16 train (NM for Neumático Méxicano, 16 for the design year 2016) has been built by CAF in Mexico was put into operation on 16 March 2019 in the presence of Mexico City’s new mayor, Claudia Sheinbaum. The train is in operation since then on line 1. Due to its’ characteristic front design, the train is also called “el toro” (the bull). The 9-car train has a total length of 150 m and is capable of transporting 2,241 passengers (@10 persons per square metre).) On the occasion of the 50th anniversary of Mexico City’s metro, the train has been decorated with colorful Quetzalcoatl patterns. Quetzalcoatl is a deity from the times of the Aztecs, Toltecs and the Mayas. Literally translated, the name means “feathered serpent”. Traces of the indigenous Mexican empires can not only be found on the new metro trains, but also in several metro stations which are named in native languages such as Nahuatl. Decorations are signs are also being find in some of the stations.

The history of Mexico City’s started on September 4th 1969 when the inaugural train ran for the first time on line 1 between Chapultepec and Zaragoza. At the time, Alsthom had delivered the first series of MP-68 trains. Since then, the network has grown to an length of 226 kilometers with 12 lines. Transporting over 5 million passengers per day, the “Metro de México” is today the eighth-busiest metro system in the world. Due to financial cuts and the expansion of the Bus Rapid Transit network on the surface, subway extension in Mexico has stalled during past decade. Only the 25.1 km long line 12 has been opened in 2012/ 2014. Currently there is work ongoing on a 4.5 km extension of Line 12 from Mixcoac to Observatorio. In Observatorio, passengers will be able to transfer to Tren Interurbano which is also under construction. It will link Mexico City with the city of Toluca, 57 km west of the Distrito Federal. The opening was scheduled for the end of 2018, but has been delayed for at least a year due to construction and funding difficulties.