For the first time in Denmark: Electric double-articulated buses on a Bus Rapid Transit line in Aalborg 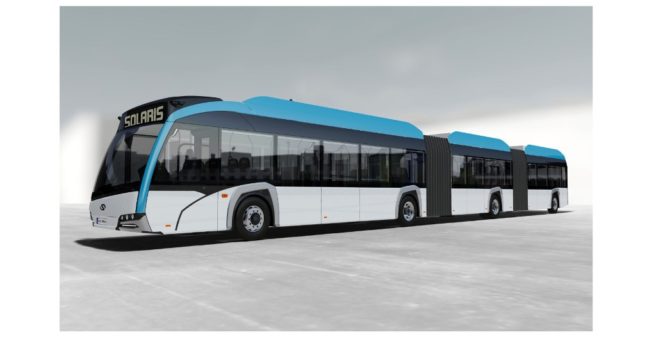 Several years after the construction of a tramway in Aalborg in the very north of Denmark was placed on hold, 14 double-articulated e-buses have now been ordered for the a new BRT  (Bus Rapid Transit) line currently under construction on the city’s own track. Solaris Bus&Coach is supplying its “Urbino 24 electric” model in the MetroStyle version to the new operator Tide Bus Danmark.

“Plusbus” is name of the new BRT line which will run on its own alignment for long sections and will have priority on traffic lights and crossings. The 12-kilometre route from the racecourse in the west via the city centre and Aalborg University to the New Aalborg University Hospital in the east will take approximately 32 minutes. The line will have 22 stops, with a bus in sight every 7.5 minutes. No less than 50 000 inhabitants will live less than 500 metres from a BRT station. The opening is scheduled for 2023, by which time the new double-articulated bus on order will be delivered, tested and available for service.

These are 24-metre vehicles specially designed to operate the BRT (Bus Rapid Transit) systems. For Solaris, this is the first order as an all-electric bus for this new model, which will be presented as a battery trolleybus at Busworld Brussels in 2019. This prototype currently is on test at the trollleybus system in Tallinn.

Each of the 14 ordered unique e-buses will be fitted with automatic driver assistance systems. MirrorEye is a system of cameras that replaces the rear- and side-view mirrors and ensures optimal visibility. Additionally, the system reduces the total width of the bus, which is particularly important on narrow streets or with increased road traffic. The Mobileye Shield+ system will, in turn, allow risks related to the vehicle’s blind spot to be eliminated. Thanks to cameras placed on both its sides, the driver receives warnings of pedestrians and cyclists located nearby. In order to improve fleet management, the Urbino 24 electric MetroStyle will be equipped with eSConnect, a comprehensive diagnostics instrument, to enhance operational efficiency and facilitate maintenance.

Aalborg is one of the 6 Danish cities that had already committed themselves last year to the exclusive procurement of electric buses from 2021. Tide Bus, the new operator of public transport in the city of 120,000 inhabitants in Jutland, is currently procuring 67 three-axle Van Hool and 41 two-axle Golden Dragon buses.