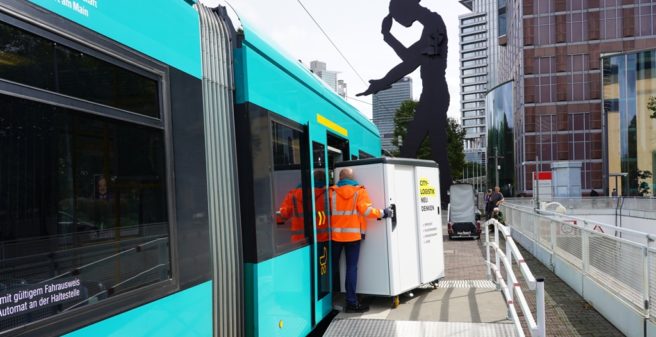 From road to rail: To kick off the 2nd National Bike Logistics Conference ( 2. Nationalen Radlogistik-Konferenz ) in Frankfurt, public transport operator Verkehrsgesellschaft Frankfurt am Main mbH (VGF) and Cargobike manufacturer ONOMOTION GmbH demonstrated how a combination of cargo containerization and tramway operation could support emission-free city logistics. Together with VGF, the Berlin-based mobility service provider showed how goods are transported along the entire supply chain in standardized containers using a freight tramway and the ONO e-load bike. The interaction of several modes of transport on the “middle” and “last mile” such as tramway and e-cargo bike was demonstrated to the press at one of VGF’s depot areas in late September.

“VGF has already been testing and evaluating freight tramway options with various partners since 2018. We are excited about how much potential there is in this idea and how the project has developed technically and in terms of content “, explains Michael Rüffer, Managing Director of VGF.

From the perspective of ONOMOTION, the combination of tramway and Cargobike is the logical implementation of the white paper “Intermodal Logistics Chain in Urban Areas”. ONOMOTION had already published this together with partners at the beginning of the year. Using Frankfurt am Main as an example, the authors showed that up to 80 percent of inner-city deliveries might be realized with the help of combined transport and that, in addition, CO2 emissions could be reduced by almost 64 percent.

The cargo tram („Gütertram“) concept is not new. There were already pilot projects in Frankfurt and other cities a few years ago. This idea is now being taken a step further – the partners are integrating the existing tramway infrastructure and vehicles and the emission-free e-load bikes from ONOMOTION in this approach. The starting point for the test ride in Frankfurt was the VGF depot Gutleut. There, ONOMOTION demonstrated how the standardized and compact city containers can be removed from the ONO and rolled over a ramp into the tramway and secured there without much effort. The containers, with a capacity of 2.1 cubic meters and a length of 1.70 meters, fit easily into the multi-purpose area of a tramway. In other words, where there is usually room for baby carriages and wheelchairs. After a short trip to the Frankfurt Messe turning loop, the containers will be reattached to the ONO. “The road will not be able to solve the traffic congestion in the cities. With rail vehicles and integrated cargo bike delivery, we offer an ecologically and economically sensible alternative that has a lot of potential,” says ONOMOTION Managing Director Beres Seelbach.

Theoretically, two types of use of a freight tramway are conceivable for public transport companies: One is the mixed use of goods and passengers. In this case, the companies can integrate container transport into regular operations and would thus avoid empty runs during off-peak times in the evening and early morning. However, the area for passengers must be separated from the freight transport. Secondly, an exclusive use of the tramway as freight tramway. This picks up the already picked containers from a depot on the outskirts of the city and transports them to suitable stops along the inner-city routes. From there, ONO then picks up the dockable containers for fine distribution to households. This type of transport would have the advantage of flexible use of the tramway lines for freight transport and would guarantee a higher transport volume with up to ten containers per freight tramway.

In addition, the use of modern track and trace communication systems would enable rapid container location, optimization and handling. “At the inner-city stops, only small buffer areas would thus be necessary to store the containers temporarily for a short time,” explains Seelbach. This optimizes the operating procedures of the tramways and e-load bikes. Since space in the city center is expensive and scarce, microdeposits are an ideal solution for delivering parcels from there quickly, efficiently and without emissions. Time is not lost even if the cargo bikes have to return to the hub several times, as the containers are already loaded and can be attached to the Cargobike in just a few steps.

VGF is currently examining another initial application: vans and trucks are used daily to transport materials, tools and smaller work equipment internally between the individual operating sites. Mail is also distributed from the headquarters in the city center to all workshops and depots. In this case, transporting the containers by tramway would be a good solution. The advantage is that heavy work equipment could be unloaded directly at the workshops and depots, and the remaining freight would then be transported onward by cargo bikes.

In the next stage, tests on the tramway routes must prove the operational practicality. An interesting project in any case!

Global trade has shown for decades that the distribution of freight traffic among several modes of transport has potential. Standardized containers enable and accelerate these combined transports. Taking Frankfurt am Main as an example, with a freight volume of 14,500 daily packages in the inner-city districts, the authors of the white paper “Intermodal supply chain in urban areas” show that 80 percent, or around 11,600 packages, could be delivered by cargo tramway and e-load bike. Only 20 percent, or about 2,900 deliveries, would have to be delivered by traditional means due to size and weight. The major advantage of such a hybrid supply chain on the “middle” and “last mile” is the reduction of CO2 emissions in addition to the traffic relief on the roads. The exemplary volume of 14,500 parcels in the inner-city area causes only 1.1 tons of CO2 in the combination of several modes of transport with the standardized containers. Compared with the single-stage transport route, this corresponds to a saving of just under 64 percent. At the same time, at 27.62 euros per cubic meter, this route is cost-neutral compared with the conventional transport route. The Berlin-based Cargobike manufacturer ONOMOTION GmbH, Porsche Consulting, EIT InnoEnergy, the Hörmann Group, EURA, Hermes Germany GmbH and the Research Lab for Urban Transport at the Frankfurt University of Applied Sciences were involved in the white paper.

The Idea to use trams to transport cargo itself is nothing new, we all know the “Cargo Tram” wich was used untill end of 2020 to transport parts for Vokswagen through the city Dresden https://de.wikipedia.org/wiki/CarGoTram_(Dresden) . Its not a bad idea to use the tram network also for cargo transports (like a normal railway route, were there are also cargo trains), but the concept with loading cargo containers in normal trams is just unpractical and not very efficient in my opinion.

Lets say they load the containers at the depot, you would need build a special platform there just for loading and unloading cargo in order to make it somehow efficient. Also there must be a storage / terminal area somewere were the cargo is loaded in and out of the containers. At the stations, you also need an area / space were the countainers are stored and the cargo is transferred to bikes or cars or whatever is used to transport it to its final destination. I dont think that this would be easy to realize at every station. Especially for underground stations or tram stops, wich are in the middle of a road.

The container loading and unloading at the stations costs extra time and the containers would have to be moved around the platform and station. At underground stations, they need to use the elevators which are there for disabled passengers. It would most likely hinder passengers and the passengers hinder the cargo operations.

It could only work for transporting cargo between depots and stations, were there is enough space to build storage / loading areas for the cargo. It would also be possiable at stations were there are sidings wich are normally used to park trams to use these for loading / unloading cargo. Then it wouldnt need to be hauled around the passenger platforms. However, you would also need storage space and maybe ramps etc. there for the cargo carts.

The whole concept with special cargo tram services is not new and basically the concept of the cargo tram in Dresden. The cargo cargo tram Dresen was introduced in 2000/2001 and since then no other city had made something like this. Nothing new here, just an old concept rebranded. Using normal passenger trams would not make much sense, since they have very limited space for cargo. Its like you would want to use a bus for transporting cargo.

The cargo trams would have to be build and maintained.
It would most likely be a lot cheaper to just use electric vans and bikes instead of cargo trams to transport cargo through the city.
A normal van like an MB-Sprinter could carry more of the containers than a passenger tram.