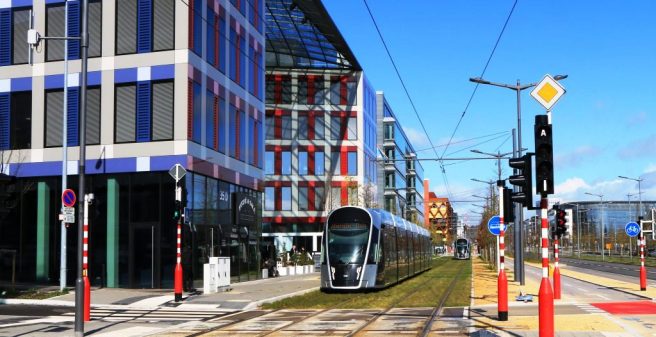 Luxemborg introduces free rides to all passengers and invests heavily in infrastructure to increase the use of public transport. A new low floor tramway is part of the strategy.

They may not be the very first ones, but nevertheless the Luxembourgers will be a kind of forerunner once the plan is carried out: From 1 March 2020 onwards, all bus and train lines will be free of charge to use nationwide. Ticket sales will be discontinued immediately. The state incurs additional costs of about EUR 41 million per year – which is the equivalent of the annual fare income of all public transport companies so far. The rest of the approx. EUR 500 million annual operating costs is already been financed by the state budget anyway. At first glance the approach might look quite radical, however it is justified primarily by the aim to significantly increase the share of public transport in the modal split which is currently at 19% at the expense of the current 60% car users. The main target is to convince the large number of commuters into Luxembourg to use public transport. But there are also socio-political motives behind the project in order to create new incentives especially for the socially disadvantaged in view of the high cost of living in the Grand Duchy. Luxembourg is the country with the highest private car rate per capita in Europe, and the number of commuters is extremely high with around 175,000 people per day – in comparison with the just 602,000 inhabitants in the entire country. The free public transport scheme is intended to provide additional incentives to switch from car to train, bus and tram usage. But as shown by singular examples from other cities, this alone might not be enough: In Tallinn, a similar model has been existing for some years, but the number of passengers has not increased as expected, if at all. The main criticism in Estonia is the quality of the public transport service, and because of this, Luxembourg is making significant efforts in that area.

Luxembourg had long discussed how best to meet the requirements for improved service quality. It has been clear already since the 1990s that existing transport systems alone could not offer an attractive alternative to motorized individual transport in the long run, and subsequently various options were discussed and different measures have been tried. A Tram-Train project was the preferred option for quite a while, but was finally turned down: the hurdle of a city-compatible integration into the existing infrastructure seemed to large. A Bus-Rapid-Transit (BRT) scheme with high passenger capacity vehicles was also considered as an option. Bus-trailer sets have been introduced primarily on suburban routes, and various models of double-articulated buses have been used on city routes for some years, including the heavily used line 16 from the airport via the Kirchberg plateau through the center and the central station to the south of the capital.

The last three ones are part of the so-called UREVO Project (“Urban Revolution”) which stands for innovative, partially zero-emission public transport.

The buses met most of the expectations, but for further capacity expansion only a rail-based solution was considered as an acceptable solution. The decision to build a modern low-floor tram was finally taken in 2014. The entire project cost is 565 m€. Only one year later, construction work began on the track, 32 low-floor Urbos-type trams were ordered with Spanish CAF. Revenue service started on 10 December 2017.

The first line section was built on the so-called Kirchberg Plateau, on which almost most important international institutions, some cultural institutions, the exhibition center and the university are located. Additionally, at the temporary terminal Pafendall two new, parallel funiculars were installed and provide a rapid connection to the new train station Pfaffenthal-Kirchberg on the railway line Luxembourg-Ettelbruck, situated some 40 meters lower in the valley – by any means a quite remarkable construction work.

Since 27 July 2018, the new trams cross the long bridge Rout Breck / Ponte Rouge across the valley and reach the edge of the upper town after a further three stops. The current terminus is located at the Staereplaz / Place de l’Etoile. Further construction work has started in order to connect the city center and the main station by 2020. Further extensions are planned at both ends of the line: From Luxexpo to the airport Findel and from the main station to Cloche d’Or in the southwest. Finally, the total length of the light rail line will be 16 km.

The Luxembourgers are convinced of the success of their new trams, and the occupancy is quite high – even before reaching the city center. A total of 17,000 passengers per working day are transported on the first short stretch of route on the Kirchberg. This is almost twice as much as previously expected. The seven-car, 42-meter Urbos-type trams are characterized by their modern, exterior-style design. The interior design is strikingly colourful and equipped with several interesting design features.

The integrated track is mostly covered with grass and fits well into the modern international district and it will do as well in other parts of the city. From Pafendall, the trams operate to the center without overhead line on a 3.6 km stretch, being powered by on-board supercaps which are recharged on the part of the route which has catenary. The catenary-free design will certainly increase the acceptance of the rail infrastructure especially on sections such as the Av. Liberté in the center.

After the final commissioning of the complete light rail line, the route of the existing bus line 16 will be altered. But even then, double-articulated buses with their high passenger capacity will certainly find a useful application on other lines – and their use will be for free of charge as with all public transport in Luxembourg in the near future!