From transport to mobility: rethink! 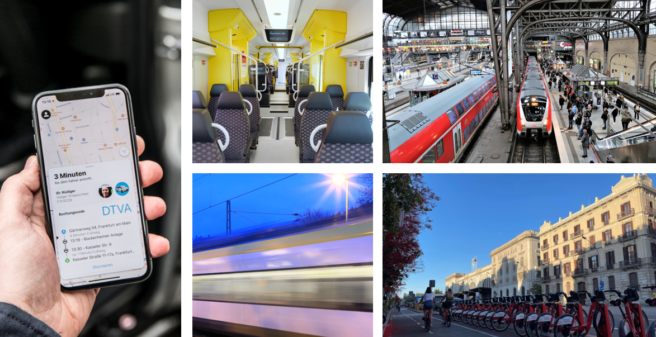 On 9 and 10 June 2021, the 10th Public Transport Innovation Congress took place in Freiburg i.Br. as a digital event.

Completely unintentionally, this event demonstrated the dangers to which public transport must attach the greatest importance, despite or precisely because of the progress in computerisation and automation. It must be able to physically move people from place to place even when operating software, data transmission, information systems or ticket sales are paralysed by technical or human errors or attacks. And it must guarantee the safety of passengers in any case without, for example, vehicle doors opening unintentionally during the journey or subways running uncontrollably. The participants of this conference got a foretaste of such incidents when, especially on the first day of the congress, the lectures could only reach the audience in fragments due to problems with the data line and had to be delivered later. This must be seen as a warning to all those responsible in politics, administration and operations to take the necessary precautions here and to ensure fall-back levels in order to guarantee safety in particular, but also the transport of people.

Framed by the greetings of the Lord Mayor of the City of Freiburg, Martin Horn, and the Minister of Transport of the State of Baden-Württemberg, Winfried Hermann, as well as their explanations of the transport policy in the south-west of Germany and in particular in the city of Freiburg and the surrounding Breisgau region, the congress showed the challenges that the public transport sector is facing today.

Already in these introductory remarks it became clear that public transport has to deal with completely new questions due to contradictory developments, namely on the one hand the increased environmental requirements and on the other hand the technological change, the social development, accelerated by the Corona pandemic. Whereas it was previously believed that only public transport could bring about a lasting change in the CO2 emissions of transport, we now find that cycling and walking are once again becoming more popular in cities and that many employees who used to commute to work every day now do a large part of their work at home. In addition, the car industry is now promoting vehicles with hybrid or battery technology as environmentally friendly. At the same time, public transport vehicles have a reputation for being unclean. It remains to be seen whether, after the Corona pandemic subsides, people will have less inclination to move around and a greater need for hygiene and distance from fellow travellers. All in all, it must be said that the current conditions for public transport are rather negative.

The individual plenary presentations by various exponents from politics, transport companies and science are to be understood against this background. In addition to the plenary sessions on the two mornings, parallel lectures were held in the afternoon of the first day of the congress on the topics of customer orientation, operations and transport planning, technology, as well as marketing and tariffs. We will report on selected lectures in the near future.

Therefore, Prof. Dr. Kay Axhausen from the ETH Zurich summarised the above-mentioned points in his keynote speech, showed how the number of people leaving their homes every day has decreased in Switzerland and gave first hints on possible measures in favour of local public transport.

With the question of whether local transport needs a new business model, Susanne Henckel from the Verkehrsverbund Berlin-Brandenburg (Berlin-Brandenburg Transport Association) presented a future model for local public transport with ten proposals, some of which were audacious.

Prof. Dr. Claas Christian Germelmann from the University of Bayreuth spoke about how citizens learned to use more digital services during the lockdown and how this ease of use is now also expected from public transport. He proposes to learn to understand the motivations of existing and potential new customers and to support them in achieving their personal goals.

In his statement on transport policy, Minister of Transport Winfried Hermann emphasised that climate change is progressing rapidly despite Corona, stressed how extraordinarily important public transport is for climate protection and stated that the German Land of Baden-Württemberg will continue to provide the necessary funds in association with the federal government and the municipalities.

Dr. Christian Hillbrand from the Vorarlberg transport association showed what high-quality mobility services under the name Smart mobil have already been in place in this Austrian province for years. However, much more needs to be done in the future. To this end, Vorarlberg is experimenting with improvements before and during the journey, but also in the area of connections, as part of a project called Vmobil Lab, in order to attract passengers with new and flexibly adaptable offers.

Jörg Thiemann-Linden from the office thiemann-linden stadt & mobilität showed how local planning could drive public transport forward and how in combination many measures can work together. He pleaded for a comprehensive integration of urban and transport planning, which should in particular lead to all places of urban life being accessible in a short time. Thus, he speaks of the “15-minute city” in contrast to urban sprawl and motorisation.

Prof. Dr. Peter Maas from the Swiss University of St. Gallen presented an important aspect in this direction. He showed how important it is from a customer’s point of view that pedestrian access routes to mobility are designed in a new and attractive way, and especially that old, now abandoned routes are revived.

In their brilliant final presentation, Heinz Vögeli and Daniel Soldenhoff from the Denkfabrik Mobilität, a network of about a dozen proactive and innovative creative minds with professional backgrounds in public transport, information technology, advertising and railway technology, pleaded for a rethink for the mobile future and thus shook up the by then maybe not so many participants of the congress any more. They thus summarised the various concrete proposals of the Innovation Congress for a radical rethink – away from the view of transport as a transport technology, towards mobility as the fulfilment of people’s needs, wishes and dreams.