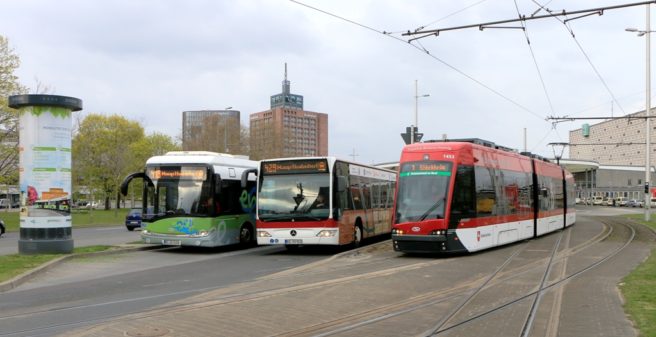 Braunschweig, Lower Saxony’s second largest city, has big plans for its local public transportation system. It’s not only the tram, locally known here as “Stadtbahn” (light rail), which will be expanded, but the bus system will also be completely converted to electric operation.

Lord Mayor Ulrich Markurth says: “Our aim is to encourage more and more people to switch to trams and buses. We want Braunschweig to become a transport reference region. The expansion of the light rail system and an electrically powered bus fleet are crucial elements in this process”.

As early as in March 2014, a first electric bus was put into service by the BSVAG, the local transport operator Braunschweiger Verkehrs-AG, as part of the “Emil” project (“Electromobility by means of inductive charging”). It was a Solaris Urbino 12 electric (no. 1401), which was used on the ring line 419.

The special feature of the previous Braunschweig electric bus was – and still is – that recharging is done on the line and not via pantograph (neither direct nor inverted), but inductively according to the Bombardier “Primove” system: the bus stops over a charging plate embedded in the roadway, a “charging pad” lowers itself and stopps shortly before hitting the ground and without direct contact, the bus draws power for its batteries. Braunschweig’s transport operator was thus one of only three companies that decided to use the Bombardier Primove system for recharging: Berlin, Mannheim and Braunschweig.

In November 2013, the author was invited by BSVAG to the factory in Bolechowo, Poland, for the delivery of car 1401. We drove the car around Bolechowo and it worked perfectly. As mentioned above, in March 2014, it started its regular service in Braunschweig.

At VDV’s electric bus conference in Berlin in early February 2020, we met the electric bus project manager of Braunschweiger Verkehrs GmbH (BSVG). Given the fact, that in the meantime Berlin and Mannheim had abandonded their electric bus operations based on Bombardier Primove charging technology, we asked him what the situation was like with the Primove application in Braunschweig. “No problem at all”, was the answer, “it works just fine.” But now BSVG is announcing a “technological” upgrade for its bus division: “the step-by-step changeover” to electric buses.

For the conversion to electric buses, the city of Braunschweig and BSVG sought the advice from the “Institute for High Voltage Technology and Electrical Power Systems” at the TU Technical University of Braunschweig.They investigated which line bundles would be the best fit for the conversion to electric bus operations. VCBD GmbH in Dresden recommended the procurement of electric buses, which can be recharged both overnight at the depot as well as during their operating hours on their respective lines. Which system of recharging on the line will be used in Braunschweig has yet to be decided.

The Institute of the TU Braunschweig calculated the ecological benefit for the city of Braunschweig and the additional costs for the acquisition and operations of the electric buses. The additional costs will amount to 700,000 to 1,000,000 euros per year. The conversion of the entire bus fleet will require 57 12-metre-buses and 86 articulated vehicles (a total of 143 buses).

BSVG managing director Jörg Reincke says: “We will now start the preparations. We can only manage the conversion of our entire bus system with subsidies. We are now positioning ourselves so that we can immediately submit the necessary applications”. If subsidies are available, the first concrete plans can be made in2021, and the first new electric buses can then be put into service starting from 2023.

The EU’s “Clean Vehicle Directive” stipulates that from 2021 and until 2025 45% of all newly purchased buses must have alternative drivetrains. From 2026 to 2030 the percentage must be as high as 65 %. According to the city counselor Leuer: “This will not only improve the air quality in the city, but the citizens will also benefit from significantly lower noise emissions”.

All this of course also means that “Primove” does not have much of a future in Braunschweig. But in contrast to what has been speculated elsewhere, the five Braunschweig “Emil” will not go to the scrap heap. They work perfectly. They will remain in operation at least until they have reached either the final end of their economic viability or at least until they have been completely written off economically.

Concrete improvements are planned in the northwest of the city, namely for the towns and districts of Groß Schwülper, Harxbüttel and Thune. In the future, line 480 to Groß Schwülper will run every hour from Monday to Friday between 5 and 20 o’clock, and every two hours on Saturdays and Sundays. In addition, line 111 of the VLG Gifhorn, which travels to the stadium via Hansestraße and Gifhorner Straße, will provide a connection to the tram to the city centre. Finally, line 434 via Lagesbüttel, Harxbüttel and Thune provides a connection to the tram line 1 in the district of Wenden. This means that there will be a de facto half-hourly interval between Groß Schwülper and the city of Braunschweig.

Which brings us to the BSVG’s plans to expand the tram (light rail). It should be noted in advance that the framework application for the extension of the tramway, the basis for its funding, will be submitted in due course to the Land of Lower Saxony.

Framework agreement for the extension of the light rail system

In February 2017, the city council passed a resolution in principle to expand the light rail system. As a result, a “framework proposal” was then drawn up, the content of which is the railway line network that should be in place by the year 2030. It also contains an overview of the expected costs and the envisaged subsidies. Such a framework application is comparable to a letter of application. The city of Braunschweig and its transport operator, the BSVG, made clear how they intend to make public transport in the city even more attractive.

Possible plans for a railway in the direction of Lehndorf, Kanzlerfeld and possibly Lamme have deliberately been kept open. And the BSVG points out that such a framework application does not oblige the project partner to actually implement the overall project to the extent described.

According to the Municipal Transport Financing Act (Gemeinde-Verkehrs-Finanzierungs-Gesetz GVFG), transport projects are only funded if the eligible costs amount to at least 30 million euros. Such a framework application can, however, still help individual projects if these 30 million are not reached. This applies, for example, to the planned extension of tram line 3 through the Volkmarode district and the “western inner-city line”, which would create a closed tram ring around the city between Radeklint and Theodor-Heuss-Platz via Güldenstraße. The attraction of this ring would be that there would be a diversion route for the most frequently used section of the Braunschweig tram network between Hagenmarkt and the shopping centre called “Schloss”. If the federal government approves the Braunschweig ideas, the project will be classified as a “project provisionally accepted” by GVFG.

The aim is to achieve the greatest possible benefit for passengers. Mayor Markurth: “The less often a passenger has to change a tram or bus, the greater the benefit”.

The concrete project planning measure include among others:

Braunschweig has set itself a lot of goals for its public transport system. It remains exciting to see how soon it can be realised. At least something has to happen shortly with regard to the electric buses: the EU’s “Clean Vehicle Directive” leaves hardly any other choice.