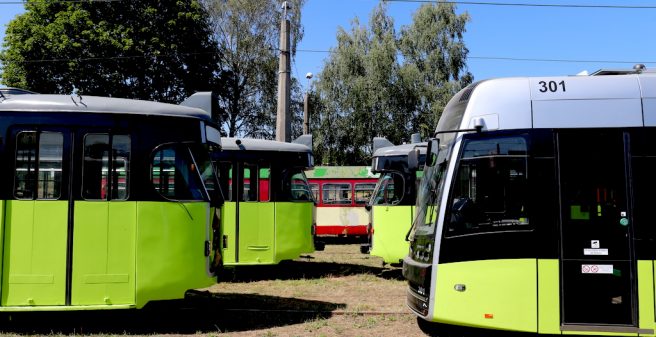 Waiting at the depot: The new PESA Twist and the ex Kassel GT6 are waiting to resume tram operation in Gorzów I Photo: UTM

Gorzów Wielkopolski, located in the west of Poland, has a 11.8 km tram network which has been suspended since 1 October 2017 to be modernized for two years. Passengers are using the replacement buses since then.

During the past 1,5 years, large parts of the infrastructure have been refurbished and 14 PESA Twist low-floor trams are being delivered to MZK, the public transport operator.

Until today, seven Twist trams have already been delivered to Gorzów. 9 out of the remaining 18 former Kassel DUEWAG/ Credé/ Wegmann 6ZGTW/ GT6 trams have been refurbished with new interiors and the new green MZK livery which is also found on the low-floor trams. Some of the remaining DUEWAG/ Credé 6EGTW/ GT6 trams are still standing at the depot whereas the entire Konstal 105Na fleet has been scrapped, apart from two vehicles.

The inauguration of line 1 is planned for September 2019. Due to the fact the the turning loop of line 1 in Silwana still needs to be modernised and adapted for the future 0.7 km extension to the north-east, trams will terminate at a new intermediate stop at Ulica Dowgielewiczowej. For this reason, MZK will only be able to operate the bidirectional PESA’s on this line. The re-entry into operation of line 2 is foreseen in two years as works have not yet started at all on this line. Urban Transport Magazine will continuously report on the developments.

Open Day at the depot

On Saturday 27 July 2019, MZK is organizing a so-called „tramway picnic“ at the tram depot in Wieprzyce to mark the 120th anniversary of tram transport in Gorzów. Tram operations in Gorzów, at that time part of Prussia/ Germany and called Landsberg by the river Warthe, started in 1899. Due to the effects of World War II, tram operation was replaced by trolleybuses in 1941 – 1947 but eventually tram service resumed and the network was extended in the 1950’s under Polish rule.

Although there is no tram operation at the moment, MZK will offer several attractions. There will be a simulation of a collision between a tram and a car at 11h30, a tram and bus fleet exhibition as well as artistic performances. The picnic will start at 11.00 and will last four hours.