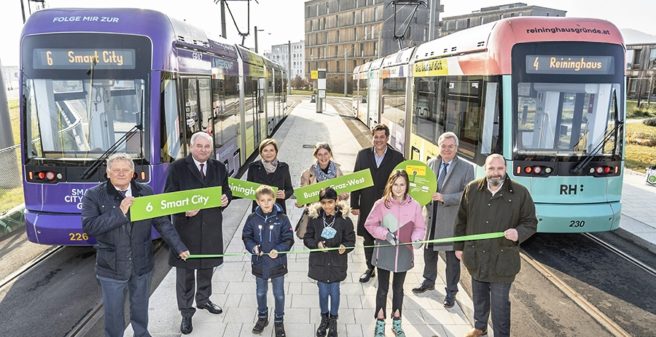 For decades, the tram network has been the backbone of public transport in Graz, the capital of the province of Styria (Steiermark) and, with approximately 300,000 inhabitants, Austria’s second-largest city. In the 1950s, 1960s, and 1970s some lines were closed, but since the turn of the millennium at the latest, the importance of the tram for urban transport in Graz has been undeniably recognised and led to several expansion projects.

On 26 November 2021, two new tramway section started operation, with a total of 3.1 km and 8 new stops, this is the largest network extension of the Graz tram in about 95 years! In both cases, newly built or redesigned parts of the city will be connected that previously had no urban rail connection.

The Alte Poststraße – Reininghaus section, which is served by line 4 (Reininghaus – Liebenau), is 1.8 km long. It connects the completely redesigned, previously industrial neighbourhood on and around the site of the former Reininghaus brewery. At the new terminus, a connection to the new south-west line to Straßgang of future tramway service 8, is to be built in a few years.

The new “Smart City”, which is now connected by a new tramway section branching off the existing network at Daumgasse next to the main railway station, is also characterised by modern new buildings. Four new stops are served by line tramway 6 from Smart City to St. Peter. The terminus is located in a loop in the middle of the new quarter.

Service on both new lines began on schedule earlier in the morning of 26 November, without an extended opening ceremony.

The next projects on the way

The next new construction projects foresee the realisation of the second inner city axis along Neutorgasse, among others. Further projects include a new route to Gösting as well as the new line 2 north of city center.

The tram on routes 4 and 6 operate every 6 minutes in the early morning and evening peaks, otherwise every 7.5 minutes. Total cost of the two tram extensions together is 72.5 million euros, of which 44.2 million go for Reininghaus and 28.3 million for the Smart City connection. The province of Styria is bearing 1/3 of the project costs. In addition, 62 million euros are budgeted for the procurement of 15 new trams – the investment has already been approved by Graz city authorities during the first quarter of 2021.

A network map of Graz’ tramways can be found here:
http://www.urbanrail.net/eu/at/graz/graz.htm