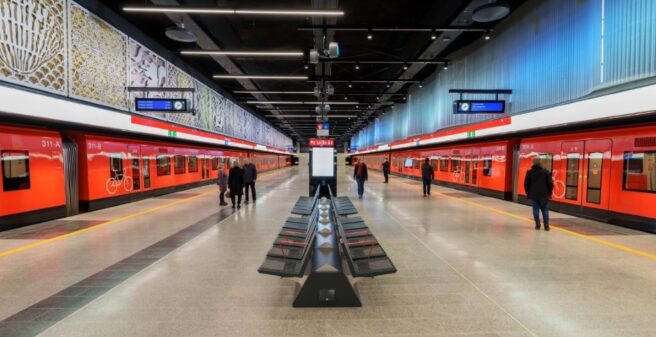 Länsimetro/Västmetron is the Western part of Helsinkis metro network which is owned by the by the municipalities of Espoo and Helsinki. The first section was opened as a prolongation of the capital’s existing metro lines from Ruoholahti to Matinkylä in 2017, and now the second phase between Matinkylä and Kivenlahti in Espoo started revenue service – today, on Saturday 3 December 2022. The new section of line is seven kilometers long, with five new stations Finnoo, Kaitaa, Soukka, Espoonlahti and Kivenlahti and runs entirely underground.

Although the metro started operating, construction continues around the stations. In the existing areas of Kaitaa, Soukka, Espoonlahti and Kivenlahti development will be concentrated around the stations and services will improve. A completely new neighborhood, Finnoo, is being created. The „metro zone“ area in Espoo has a growth potential of 70,000 new residents and potential for a 100 percent increase in the number of jobs by 2050.

Civil works on the new Matinkylä–Kivenlahti section of the West Metro was already  completed in September. The timelines and costs of the construction of the metro extension were kept in line with the decisions of the Espoo City Council, says Olli Isotalo, the Deputy Mayor for Urban Environment, the Chairman of the Board of Länsimetro. Länsimetro Oy is the owner of the tracks, stations and the metro system from Ruoholahti westwards, as well as responsible for their maintenance and development.

The West Metro stations have been designed by Finnish architects and the individual design of each stations gives the metro line a distinctive appearance.

With the new stations now in full operation the metro system in Helsinki and Espoo has reached a total of 43 kilometers with 30 stations. Three different metro train series operate on the 1,524 mm gauge network.

A network scheme of Helsinki’s metro is available here:
https://www.urbanrail.net/eu/fi/helsinki/helsinki.htm

To be precise the Helsinki metro gauge is 1522 mm. This is compatible with the with the national rail gauge of 1524 mm for works trains and stock transfers.