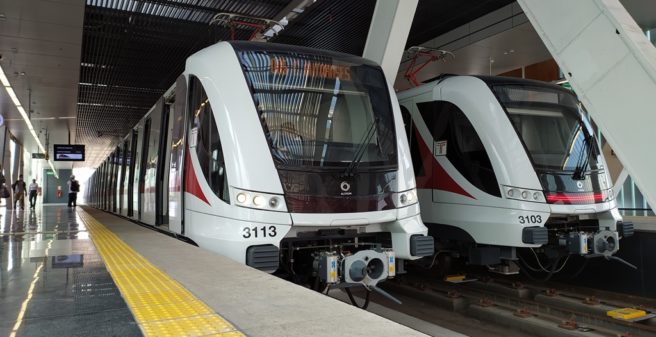 Guadalajara's 19.8 km long metro line 3 has been inaugurated on 12 September I © Roberto Castañeda

Guadalajara, with over 4 million inhabitants Mexico’s second largest city, now has a third metro line: Line 3 of the Guadalajara light rail / metro system in Mexico has been inaugurated on 12 September 2020. The line has a length of nearly 21 kilometres, covering 18 stations through the cities Zapopan, Guadalajara and Tlaquepaque. It will be operated by the local operator SITEUR (Sistema del Tren Eléctrico Urbano – Urban Electric Train System). The new line is expected to carry around 230,000 passengers daily.

In 2014, Alstom was selected by the federal Secretaría de Comunicaciones y Transportes (SCT – Communication and Transportation Ministry) to provide an integrated system for the Guadalajara network extension. The project, representing a nearly €330 million investment (with €240 million for Alstom), will enhance mobility services for residents across the State of Jalisco, providing significant social and economic benefits.

The 2014 contract included the supply of 18 3-car Metropolis trains, communication systems, the high-voltage and traction substations, and traffic control systems based on Urbalis 400, Alstom’s CBTC system. The trains are equipped with air conditioning, video surveillance, and passenger information systems.

Line 3 is the third rail line in the Guadalajara Metropolitan Area (Mexico). This line qualifies as a metro and no longer as a light rail. Is is partly running on a viaduct as well as in a tunnel section. The line consists in two viaduct sections (Guadalajara-Zapopan, Tlaquepaque- Guadalajara) and a 4 km tunnel section with 11.5 m diameter in the city centre. The tunnel has been built with a tunnel boring machine of Spanish company Sacyr. Power supply is ensured via 1500 VDC catenary.

The line connects the city centre with Zapopan, Tlaquepaque, through the Diagonal Metropolitan Road Corridor, consisting in the avenues Juan Gil Preciado, Juan Pablo II, Manuel Ávila Camacho, Alcalde / September 16 and Revolución / Francisco Silva Romero. This infrastructure project was announced by Enrique Peña Nieto through SCT as one of five commitments that he promised at the beginning of his presidency in the field of rail transport in 2013/14.

The inauguration ceremony was accompanied by Mexican President Andrés Manuel López Obrador on 12 September alongside local politicians. After the opening ceremony which took place via a web stream at 11h00, commercial operation started at 16h00. Passengers will allowed free travel until 20 September.

Guadalajara’s light rail and metro system now has a total length of 44.8 km. Lines 1 and 2 have been operating since 1989 and 1994 respectively, and are operated with 2-car articulated light-rail trains built by Concarril-Melmex, Bombardier-Siemens and Bombardier between 1988 and 2015. The trains are based on the B-type light rail vehicle which has been developed in Germany in the 1970’s.

A fourth line 4, running some 20 km on an existing railway corridor, from Guadalajara Huantitán El Bajo to Tlajomulco in the south, is currently being planned.

Further background information, pictures and an extensive map of the Guadalajara system can be found here: http://www.urbanrail.net/am/guad/guadalajara.htm

Hello, why is it considered Metro and not Light Rail? Thank you. regards

By the way, excellent article!

The metro is a system of urban trains located within a city and its metropolitan area. It is characterized by being a massive passenger transport in large cities, linking various areas and their surroundings, with high capacity and frequency and segregated from other transport systems

Metro to Tlaquepaque from Guadalajara: The Low-down - A Piece of Travel