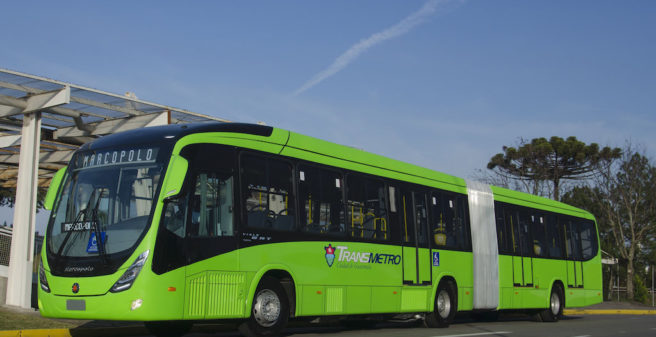 Brazilian bus builder Marcopolo reports that it has received a major export order from Guatemala City, the capital of the Central American state of Guatemala. As early as September, 20 vehicles of its BRT type “Viale Articulado BRT” will be delivered to TransMetro, the Guatemala City transport company.

The articulated buses are 20 meters long and can carry 180 passengers. They are based on the Volvo B 340 M chassis, with the “M” standing for an underfloor mid-engine in the front section. The Volvo engine in the cars for Guatemala complies with the Euro 5 pollutant standard. From a European perspective, it is not state-of-the-art, but still an enormous advance for a developing country like Guatemala.

The new Volvo / Marcopolo buses are intended for use on the city’s BRT routes (BRT = Bus Rapid Transit), a “bus express” on its own routes. Due to the underfloor mid-engine, the buses are high-floor. But that is not a problem, because passengers are boarding the BRT buses from “elevated platforms”. The articulated buses have four doors on the right-hand side and three on the left-hand side – because there are also central platforms in the BRT network.

There are ramps on two doors that make it easier to enter with wheelchairs. And this corresponds to the fact that there are two special parking spaces for wheelchairs inside the car. Twelve of the seats on the bus are specially designed for passengers with reduced mobility.

There are two destination displays on the front of the bus – a large one as usual above the windscreen, a smaller one at eye level of the waiting passengers behind the windscreen. There is also a side display and one in the rear. There are also two corresponding displays in the interior of the bus.

The new buses for Guatemala City have some features which are totally unusual for European buses: the buses do not only offer Wifi, but also an audio system with the option of playing DVD’s. Cameras not only record, but also offer the possibility of playing back what they have recorded. There are also two LCD monitors. It goes without saying that the articulated BRT buses have air conditioning systems in a country with a climate like Guatemala …

Since 2012, all city buses for Guatemala City have been supplied exclusively by Marcopolo. The Marcopolo fleet consists meanwhile in 180 buses.

In this video, Marcopolo is showing the production process of the bus fleet for TransMetro:

TransMetro was founded in February 2007. The company operates seven lines, two BRT and five “normal” bus lines. There are 350 buses available for this – that is to say, around half of the fleet currently in use was procured before 2012 and does not yet come from Marcopolo. TransMetro carries 415,000 passengers every day.

Marcopolo points out that there is not only a BRT system in Guatemala City.

The Brazilian bus builder also names (list is not complete) the following systems (without counting Brasil):