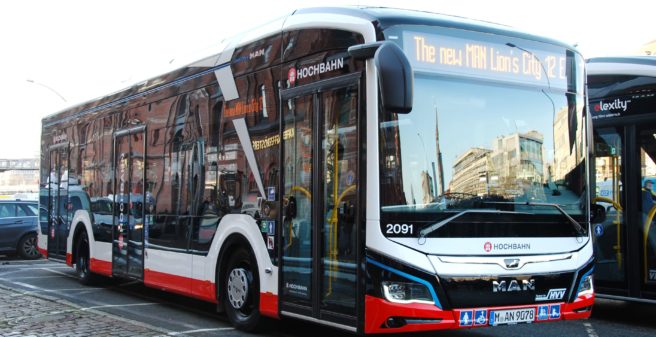 MAN handed over its first two electric buses to two customers at the “Kehrwieder” in Hamburg’s historic “Speicherstadt” (warehouse) on 19 December 2019. The “MAN Lion’s City 12 E” vehicles were commissioned by “Hamburger Hochbahn AG (HHA)” and the “Verkehrsbetriebe Hamburg – Holstein” (VHH) just in front of the former warehouse, which is also home to the legendary “Miniatur-Wunderland”, the world’s largest miniature railway exhibition. The HHA bus has received the operating number 2091, the one of VHH will probably be numbered no. 2099 in its fleet.

At the handover ceremony, Rudi Kuchta, Business Unit head at “MAN Truck & Bus”, said: “MAN is pursuing a clear roadmap in terms of electric mobility – for trucks, vans and, of course, for buses.”

Hamburg’s Mayor Dr. Peter Tschentscher, described the two electric buses as part of a strategic mobility transition that Hamburg will address in the upcoming years. From 2020 on, Hamburg will only procure emission-free buses. Buses and trains on Hamburg’s transport network will be running with 100% green electricity. And by 2030, Hamburg’s bus fleet should be converted to zero-emission vehicles.

The technology of MAN’s e-buses

The buses are 12 meter long and can accommodate 88 passengers. This number shows that the batteries have become significantly lighter over the years: Not long ago a 12-meter bus was only allowed to carry 60 passengers because of the weight of the batteries – as was the case in 2013 with an electric bus from Chinese production tested in Bonn.

The electric powertrain delivers 160 kW up to a maximum of 240 kW in the “Lion’s City 12 E”. The electric motor has found its place directly on the axle. The batteries at the MAN Lion’s City E have a modular design and allow for an installed capacity of 480 kWh. For these batteries, MAN uses its battery cell technology from the Group’s modular system.

Thanks to a special thermal management, the buses have a range of 200 kilometers at any time of the year, including in winter, and even 270 kilometers under favorable circumstances.

It is expected that electric buses will soon have a range of 350 kilometres. In addition, the industry is intensively researching to make the batteries smaller and lighter.

Hamburg’s new MAN electric buses are so-called “depot chargers”: their batteries are recharged during the overnight break at the depot. This is done with the help of a “CCS plug” (Combined Charging System). The average charging power is 100 kW; this means that the bus will be recharged in less than three hours, and in the case of the articulated version, this will take a little less than four hours. If recharged with the maximum power of 150 kW, the respective recharging times will of course be shorter.

MAN reports that a survey showed that most transport operators give priority to a flexible and trouble-free use of the buses without intermediate opportunity charging during the day. MAN’s answer to that challenge is the fact that battery technology is developing rapidly. This means that a much longer battery range can be expected soon. The concept of the Lion’s City E is designed to be upgraded to the next generation of batteries.

In the course of this year, MAN will hand over an “eBus demo fleet” of 15 vehicles to customers in five European countries. Rudi Kuchta, Business Unit head at MAN Truck & Bus: “As part of our practical trials, we gain extensive experience in daily operation with our MAN Lion’s City E.” At the same time, the new “MAN Lion’s City E” will certainly get a lot of attention in these countries.

After the handover of the two “MAN Lion’s City 12 E” at the Kehrwieder in Hamburg, the bus of the VHH took the guests to the depot of the VHH in the Hamburg district Bergedorf. All passengers were positively surprised: the bus was pleasantly quiet and smooth on both city and express streets. The acceleration was also quite impressive. A diesel bus can’t keep up… With an electric bus, it should not be a problem to keep to the timetable or even to catch up with a delay, because today’s timetables are designed for standard diesel buses.

In Bergedorf, MAN presented another novelty. One of the requirements is to obtain electricity for the bus recharge at any time of the day, during peaks and low consumption periods. In a so-called “intermediate storage”, energy can be stored when it is not required anywhere else. By doing so, peaks on the power grid could be avoided by recharging the buses when convenient.

In fact, the partners Verkehrsbetriebe Hamburg – Holstein, MAN Truck & Bus and MAN parent company VW Group have developed a solution: A container filled with 50 batteries previously installed in Volkswagen Passat GTE in their first life has been installed in the depot. Each of these batteries has a nominal capacity of 9.9 kWh, while the entire container has a capacity of exactly 495 kWh – about half a megawatt. The batteries are mounted on racks and connected to a large battery.

With these second-life-batteries, the three partners of the project want to gain experience on the design and operation of the system for future applications.

One of the arguments of e-mobility critics is that batteries are using rare materials such as cobalt and lithium. MAN communicated at the presentation of the storage facility in Bergedorf: “We show here how these raw materials can be re-used in a meaningful way. And then there is also the possibility to recycle a used battery. This allows you to recover cobalt and lithium and use them again for new batteries.”

In the second half of this year, the first buses out of the regular production run, namely 12-metre-long electric buses of the “MAN Lion’*s City 12 E” model, will be delivered to customers. They will be followed by the first “MAN Lion’s City 18 E” electric articulated buses at customers in the first half of 2021.

The two e-buses for HHA and VHH were also presented as 1:87 scale models. These have been handed over to the model railway exhibition in Hamburg where the two buses will be positioned.