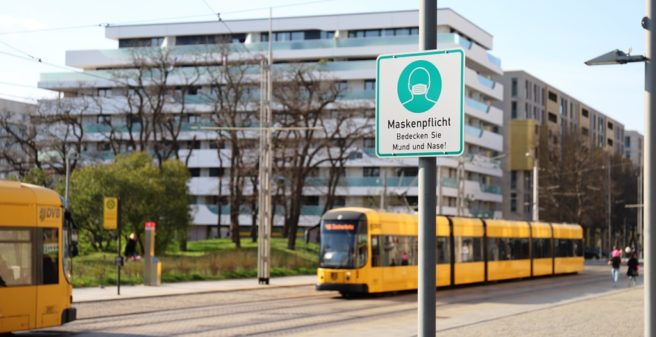 “From the crisis back to the mobility turnaround, many challenges await”.

The Corona pandemic has driven down passenger numbers in many public transport companies. The closed compartments, contact with strangers and the risk of infection feared by many people led to many commuters and public transport users switching to cars or bicycles – if they still had to travel to work at all and could not work at home in their home offices. For most German public transport operators, passenger numbers in the first wave were about 70% below pre-Corona levels, while in the second and third waves they were still about 30-50% below. In the past months, well-known operators like Deutsche Bahn and Berliner Verkehrsbetriebe (BVG) had tried to prove by means of scientific studies that the risk of infection in buses and trains is very low. We reported here. This is gradually contributing to a certain recovery. On the other hand, many workers have become accustomed to the home office and in the summertime many people are on holiday and use public transport much less. Of course, this development has economic consequences for public transport operators.

According to VDV calculations, the projected revenue losses for the industry for the years 2020 and 2021 total around seven billion euros. The Federal Government and the Länder have agreed to each compensate half of these losses. While the federal government provided 2.5 billion very quickly and straightforwardly last year as part of the Corona aid and will now provide an additional one billion, this year it is the responsibility of the Länder to provide the larger share of the funds. “With the decision now taken on the 2021 public transport rescue package, the federal government and the Länder are once again assuming equal responsibility for compensating for the corona losses of our sector. The political decision-makers have called on us to maintain our services as unrestrictedly as possible despite significant declines in passenger numbers during the pandemic, so that all passengers who depend on buses and trains can continue to rely on a functioning public transport system. Since March last year, we have implemented this with great commitment in the transport companies nationwide in order to do our part in overcoming the crisis. The resulting economic damage will now be largely compensated for by the continuation of the public transport rescue fund for 2021,” said Wortmann.

The local transport companies and associations in Germany want to win back as many customers as possible for public transport with numerous measures starting in the summer. In addition to various regional and nationwide activities in which passengers can use their tickets to take advantage of additional offers, such as extended transport options and areas of validity, a unique nationwide campaign will be implemented from 13 to 26 September. This is a thank-you to all season ticket holders. During the two weeks in September, passengers with a valid public transport season ticket can use local transport services nationwide at no additional cost (more details at the end of this article).

A few weeks ago, the Berliner Verkehrsbetriebe (BVG) took a creative approach to draw attention to the lack of demand for public transport. With the typical BVG self-irony, a bit of melancholy and pathos and a lot of confidence, all this finds its place in the new BVG film “Wir fahren allein allein” (We ride alone alone), which has been available online in the BVG channels since 21 May 2021 BVG – Wir fahren allein allein – YouTube. The film was produced by the agency Jung von Matt SAGA based on the song “Allein, Allein” by the band Polarkreis 18.

Even beyond the self-irony, pathos and art, there is of course the real core. It is that most drivers do not drive through Berlin “alone”, but with significantly emptier vehicles than before the pandemic. Since the beginning of 2021, demand has been about 50 percent of the pre-Corona level. Nevertheless, the BVG is running the full timetable so that everyone can reach their destination quickly and safely at all times, even in difficult times.

“Of course, the topic is artistically exaggerated in the film, because of course we don’t drive through the city with empty buses and trams all the time, even in times of a pandemic,” says BVG CEO Eva Kreienkamp. “But the strong images express what we mean and what many colleagues feel. The emotional messages are: We miss you. We are very much looking forward to seeing you again. We are here for you. And we all have to hold out a little longer, then together we will make Berlin the colourful, bustling and always mobile metropolis that we love so much.

But how can public transport operators win back their passengers?

Ingo Wortmann, President of the industry association VDV said: “From now on, the recovery of passengers is clearly the focus of the industry. After we were able to compensate for the very worst revenue losses in 2020 and 2021, thanks to the support of the federal government and the federal states, through two Corona rescue packages, we now have to and want to win back passengers as quickly as possible. Because with a view to the climate protection goals in the transport sector, in the achievement of which public transport plays a key role by 2030, it is necessary to transport not only as many people as before the Covid crisis in buses and trains as soon as possible, but significantly more. Of course, we continue to keep a close eye on the pandemic development and only implement what is possible within the framework of the applicable regulations.”

Currently, passenger numbers are back to around 60% of pre-crisis levels, at least in the major cities and conurbations; in the second lockdown at the end of 2020, only around 40% of the usual passengers travelled by public transport. But despite this, the sector is still a long way from the last record passenger figures from 2019 (10.4 billion passengers). On the one hand, this is due to the fact that due to less tourism, ongoing short-time work, restricted school openings and major events that have not yet returned, many people still lack the occasions to travel. But the long duration of the lockdowns also reveals trends of changed mobility behaviour.

“Digitalisation, home office and also the uncertainty about possible infections, especially at the beginning of the pandemic, have led to an increase in individual rather than shared mobility. In addition, our passengers, who have also travelled with us during the past 15 months, have higher quality expectations with regard to distances in the vehicle, cleaning and passenger information. We as an industry have to deal with these changes. In addition to the still attractively priced annual season ticket, we therefore need, for example, more flexible ticket offers and we must react even more strongly than before to the individual mobility needs of customers by linking multimodal transport offers. And of course we must massively increase the capacities and the range of services in public transport by 2030 in order to encourage more people to switch to public transport with a view to achieving the climate protection goals,” says Wortmann.

In order to achieve the climate protection goals in the transport sector by 2030 with the help of public transport, the operating performance (vehicle kilometres) would have to be increased by 60% in the next nine years, and the transport performance (passenger kilometres) would have to increase by 24% in the same period. These are the results of an independent performance cost report commissioned by the VDV. According to the report, this and other measures, such as the extensive expansion of on-demand transport in rural areas, would result in cost increases for transport companies of about 90 % compared to today. However, the revenues, mainly from ticket sales, can only be increased by about 50 %. This creates a financing gap that grows to eleven billion euros in 2030 without additional funding. “We need to significantly expand public transport services, but we cannot charge passengers for the resulting costs of the mobility turnaround. So we have to talk to the federal government, the federal states and the municipalities about coherent financing of the entire public transport system until 2030 and find solutions for it,” Wortmann concludes.

In addition to the expansion of public transport services that is necessary in the medium term, the focus in the coming months will be on winning back passengers, if the course of the pandemic continues to permit this. Within the framework of the nationwide joint campaign #besserweiter, which is being implemented by the federal government, the federal states, the municipal umbrella organisations and the transport companies under the leadership of the VDV, there are various measures to sustainably strengthen the confidence of customers in buses and trains again. For season ticket holders, the industry will implement a special and unique campaign together with the federal states: From 13 to 26 September, all passengers who have a valid public transport season ticket can use the local bus and rail services in the participating transport associations throughout Germany at no additional cost. The following conditions apply: